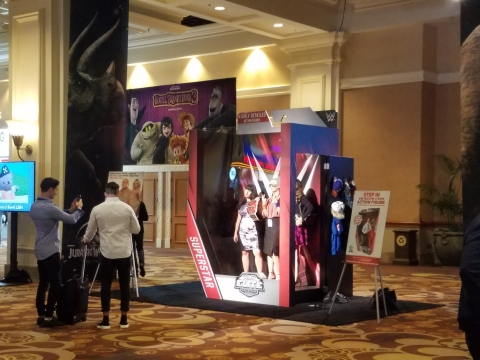 At the 2017 Licensing Expo, held May 23-25 at the Mandalay Bay Convention Center in Las Vegas, the power of the brand story was evident to the more than 16,000 attendees and 406 exhibiting companies, including 185 new exhibitors.

The overall focus of the licensing industry is to help brands expand into new businesses, with licensing providing the necessary brand exposure in these new categories.

Visitors at the event were greeted by bright primary colors and an abundance of mascots and costumed characters.

According to Jessica Blue, senior vice president of UBM Americas, the first Licensing Expo took place in 1980 in a New York City hotel but was moved to Las Vegas in 2009 to provide a more campus feel to the conference and a community setting for after-hours networking.

“The show now brings in over 30 percent attendance from outside the U.S. and international exhibitors this year are from 35 different countries,” Blue said. “This is a global show and we consider it the ‘Super Bowl’ of licensing.”

With the largest market for the licensing industry found in the United States, and China as one of the fastest growing markets for the industry, the show made sure to bring this global focus into play.

Many exhibitors noted the impressive amount of international engagement they were receiving in their booths.

“We have seen great engagement with our brand items and we wanted to showcase our company in America,” said Simon Waldron, senior vice president of marketing and licensing for Level-5 abby Inc.

He continued, “We started in Japan with our video Yo-kai Watch, and the Licensing Expo in Asia in January was a great introduction for us into the show. But we knew this is the place to be to engage with the global industry and the global reach makes sense, since we provide entertainment-based content and video, and this inspires engagement in other categories to reach a new audience. We are finding that Licensing Expo is a great place to network and find excellent promotional partnerships.”

Many attendees found a diverse mix of networking opportunities, including one new offering from last year that has gained popularity: the Matchmaking Sessions.

“The matchmaking was very popular last year, with 2,500 confirmed meetings, and this year we saw 3,700 meetings set up in advance,” Blue explained.

She added, “We think the reason the matchmaking is so popular is that it brings together a diverse mix of partners and makes great use of the show to find potential partners for licensing. We have found our attendees use the matchmaking services as much as six weeks ahead of time to really maximize their engagement efforts onsite.”

Exhibitors of all sizes found great interactions with attendees on the showfloor.

“We’ve been attending for several years now and each year we are amazed by how varied and engaged the attendee pool is,” said Susan Woods, vice president of marketing for The Icee Company.

She continued, “This is our 50th anniversary, so being at Licensing Expo really showcases the longevity of our company and all the additional products we have for those customers loyal to the Icee brand.”

Licensing agent Carol Janet from Design Plus commented about the importance of the Licensing Industry Merchandisers’ Association (LIMA).

“It is important for boutique agents to be part of LIMA to create brand awareness, work to set licensing standards for next year and for overall exposure in the industry,” Janet said.

She added, “It is great to be part of LIMA and to see how all of us can work together to improve the industry.”

The inaugural Licensing Week encapsulated all activities going on at Licensing Expo, including Licensing University and the LIMA awards.

According to Blue, consumer content has changed over the last several years and has opened markets to new digital content and distribution without the need of TV.

“Because of the popularity of video gaming and YouTube, we are seeing so many more players in the industry and on the show floor,” Blue explained.

She continued, “It also has given smaller outfits a global following and provided opportunities for these brands to not only share their story but also expose them to the world of licensing their intellectual property (IP).”

Because of this opening for new digital content, the industry also has seen an increase in cultural and heritage locations being sought for licensing, such as palaces, museums and artifacts.

“We have seen some new players on the show floor, including the Chinese Ministry of Culture and the Palace Museum,” Blue said.

She added, “It has been great to see a sharing of global cultures through this industry – it is a testament to the global impact of licensing on entertainment and brand awareness.”

Licensing Expo 2018 will return May 21-24 at the Mandalay Bay Convention Center.

Licensing International Expo Unveils Matchmaking, Sports-themed Attendee Engagement in Las Vegas
Wonder Woman, with its feature film coming out next year, led the parade of characters and other licensable properties at the 36th annual Licensing International Expo that…
4 Ways to Strengthen Your Brand Story
As we’ve watched events be forced to postpone, change location and/or go virtual, it got us thinking—do these changes affect an event’s brand? Not if the brand story is…
Power Blackout at Las Vegas Convention Center Impacts CES
On what was a packed day on the bustling CES showfloor, the massive consumer electronics show, a power blackout occurred at the Las Vegas Convention Center  impacting meeting…
HD Expo Scores Record Attendance, Exhibitors in Las Vegas
Hospitality design is booming, with the Emerald Expositions’ HD Expo, held May 13-15 at the Mandalay Bay Convention Center in Las Vegas, drawing a record crowd and exhibitors…
A Record-Setting Event for PACK EXPO Las Vegas and Healthcare Packaging Expo
The 2019 edition of PACK EXPO Las Vegas and Healthcare Packaging EXPO was a huge success by all accounts. Show owner and producer PMMI, The Association for Packaging and…
How Anaheim, Georgia Expo and Sahara Las Vegas Are Lending Helping Hands
In many ways, the COVID-19 pandemic has brought out the best in humanity, including those in the events industry. Over the past several weeks, more and more destinations,…