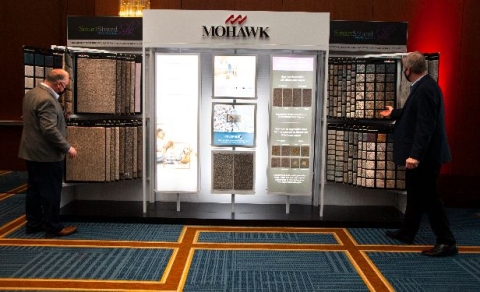 Mohawk Flooring made the daring decision during the height of the pandemic that the show must go on. Half a year later, the aptly named Momentum Road Show wraps up at The International Surface Event (aka SURFACES) at Mandalay Bay Convention Center, June 16-18, in a fully opened Las Vegas.

With the ongoing housing renovation boom, there simply was not time to wait for the pandemic to end before hitting the road, explained Ryan Thiele, senior director of national accounts at the Art Guild, who runs the operations for Mohawk’s endeavor.

“There is a very finite window for the buying season,” he said. With no other flooring industry events occurring, Mohawk decided to fill the void.”

While the show went on, it did not go on as usual. Normally, Mohawk would put on more than 20 regional shows. Understanding that was not practical, it strategically chose fewer sites while maintaining a high production. At one point, the tour was originally scheduled for seven stops but pandemic concerns limited the number to the final four.

Two-hour appointment blocks were set up to limit crowds while maximizing exhibitors’ efforts and buyers’ demands. Other safety measures included:

Given the heightened safety regulations and need for the industry to do business, Thiele acknowledged there was pressure to perform well.

The show also allowed Thiele and his team a chance to work when many within the industry were forced to sit and wait. “It may sound a little bit hokey, but everybody was really appreciative just to be part of this,” he said. “This was a real unique opportunity.”

Run by Informa, SURFACES is the largest North American flooring event serving the floor covering industry, bringing together buyers and sellers from around the world to see the latest floor covering products, tools, trends, services and technologies. Mohawk will be one of 187 exhibitors on-site, but may have a leg up reaching its community on the road.

“Mohawk didn’t stop innovating during the pandemic, and customers can count on us to bring the momentum they need for 2021 when it’s needed most,” said Jeff Meadows, Mohawk’s president of residential sales.

Momentum Builds on Trade Show Industry Restart
A bevy of good news and in-person events held recently signal positive momentum toward a restart of the trade show industry in the United States that effectively has been put…
Oklahoma City Breaks Ground on New Convention Center
Oklahoma City is gearing up to welcome a brand new convention center. On June 15, officials from the Oklahoma City Convention & Visitors Bureau (OKC CVB), local civic…
Keep Your Momentum Going
At my high school, we were ranked against classmates each year. When I was starting my senior year, my father gave me some great advice.  He told me many of my…
Caesars Entertainment Breaks Ground on CAESARS FORUM Las Vegas Conference Center
On July 16, Caesars Entertainment Corporation broke ground on its newest development: the CAESARS FORUM Las Vegas conference center. Slated to open in 2020, it will feature…
Expo Recovery Think Tank in Las Vegas Explores the Road to Safe Events
Industry leaders from across the U.S. came together at Mandalay Bay Resort in Las Vegas on Oct. 22, for Expo Recovery, a face-to-face meeting to discuss recovery solutions…
New Omni Hotel Breaks Ground Next to Kentucky International Convention Center
Dallas-based Omni Hotels & Resorts broke ground on its 30-story, 853,000-square-foot hotel and luxury apartment complex today in downtown Louisville adjacent to the…