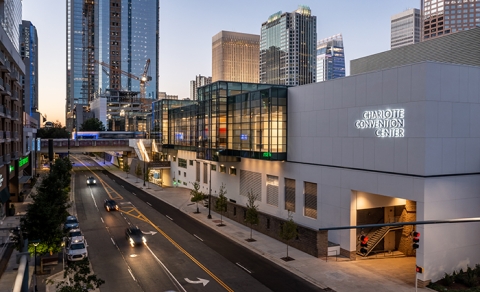 North Carolina’s Charlotte Convention Center is now ready and able to host larger meetings and conventions, thanks to a $126.9 million expansion project that has added approximately 50,000 square feet to the 26-year-old downtown venue.

On Oct. 21, the City of Charlotte, the CRVA, construction partners, hospitality industry representatives and community leaders gathered to officially open and celebrate the new state-of-the-art space via a ribbon cutting ceremony that included the unveiling of a new public artwork and remarks from city government and tourism officials, including Mayor Vi Lyles and CRVA CEO Tom Murray.

According to Charlotte Regional Visitors Authority officials, the nearly two-year-long construction project, which broke ground in December 2019, was successfully delivered on-time and on-budget. 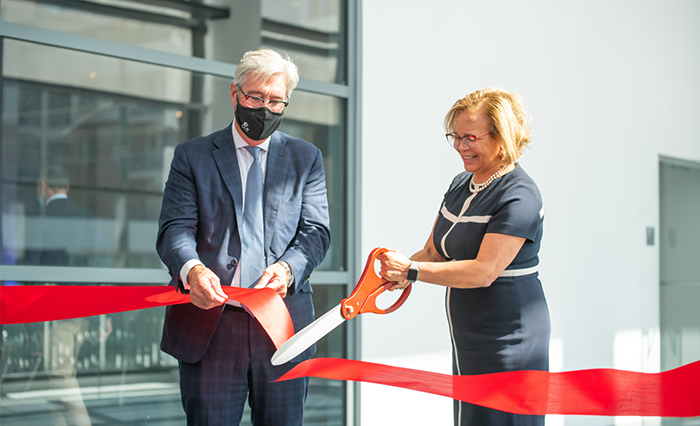 “After years of research, planning and construction, we are thrilled to finally celebrate the completion of this $126.9 million expansion and open the doors to the newest part of the Charlotte Convention Center,” Murray said. “As the trusted steward of the Charlotte region’s visitor economy, the CRVA is incredibly proud of this milestone and the role it will play in attracting impactful business, increasing economic vitality and solidifying Charlotte’s reputation as one of the premier meetings destinations in the Southeast.”

TVS, which was also the original designer of the Charlotte Convention Center, served as the project’s architect.

Designed in direct response to event planner feedback, the expanded venue will not only help enhance the attendee experience but also strengthen Charlotte’s competitiveness in the nearly $300 billion meetings and conventions industry through increased capacity, convenient accessibility and more flexible spaces, according to CRVA officials.

Now boasting 600,000 sq. ft. of total leasable space, the convention center’s expanded footprint will not only allow the city to attract bigger trade shows and conferences, but also host multiple groups in the building simultaneously.

New spaces include two highly flexible 10,000-sq.-ft. spaces that are each divisible into 19 different configurations, additional meeting rooms that have increased the venue’s tally from 41 to 55 and new pre-function spaces featuring floor-to-ceiling windows that allow for natural light and cityscape views.

Another major component of the expansion is an exterior overstreet pedestrian walkway that connects the venue to the adjacent 700-room Westin Charlotte and a LYNX Blue Line light rail stop, and provides access to the Stonewall Street corridor and Uptown Charlotte, featuring upwards of 200 restaurants, more than 6,000 hotel rooms and a vast array of entertainment options. The new walkway also includes an immersive public artwork, “SKYLINE,” a site-specific LED art installation designed and engineered by award-winning Los Angeles-based artist Susan Narduli that was selected and approved by the city’s Public Art Commission.

“Arts and culture is one of the four key brand themes we use to promote the Queen City, and this is a wonderful addition to our region’s story,” Murray added. “I’m grateful to the entire team who brought ‘SKYLINE’ to life and excited that this innovative piece is connected to the Charlotte Convention Center.” 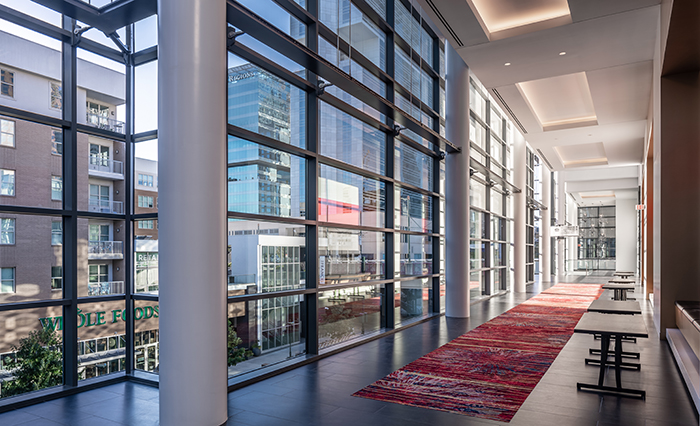 According to CRVA officials, the project’s construction didn’t come without its fair share of unique challenges. The design required expanding the building upward by adding meeting and event space onto the existing roof, which it was not originally built to accommodate, and the venue is also one of only two U.S. convention centers with a light rail line running through it. These two factors alone required extraordinary skill, coordination and planning.

Then came the onset of the pandemic just a few months into the project, which created a more complex working environment that required putting robust health and safety protocols in place to ensure the construction timeline remained on track.

But the project also went a long way in creating economic opportunity and elevating the local community, according to CRVA officials. As part of the expansion, the city and CRVA partnered with project construction management company Holder-Edison Foard-Leeper JV to create and implement ambitious supplier diversity goals and a workforce development program. Over the course of the project, the team cultivated relationships with historically underutilized businesses to expand the supply chain to better reflect the diversity of guests, customers and the broader Charlotte community.

The team also used the project as an opportunity to strengthen and diversify the workforce pipeline through a project-based apprenticeship program. The program, which resulted in the hiring of 50 new project construction workers, provided structured on-the-job learning, instruction and skills training in construction and other related building trades, enabling program graduates to earn state or national level credentials or certifications.

Since opening its doors in 1995, the Charlotte Convention Center has welcomed more than 11 million guests from around the world to conventions, trade shows, conferences, nonprofit and community celebrations, product launches, sporting events and more. The center has hosted six U.S. presidents, served as a backdrop for three movies and one television show, hosted prestigious national events such as the 2019 NBA All-Star Weekend and has had boats, cars, helicopters and even cattle on display in its expo halls.