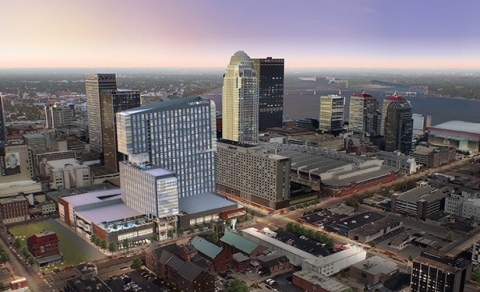 The city of Louisville, Ky., has added another high-end brand to its growing portfolio of hotel properties, in this case, a $300 million development designed to attract larger conventions and more leisure travelers to the Derby City.

Besides luxurious rooms and plentiful event space, the 30-story downtown property also offers a plethora of amenities such as restaurants, including Bob’s Steak & Chophouse, Neighborhood Services and Falls City Market; Pin + Proof, a speakeasy-style bar with bowling lanes; the equestrian and bourbon-themed Library Bar; signature Mokara Salon & Spa with fitness center and The Water Company, a rooftop pool and bar. 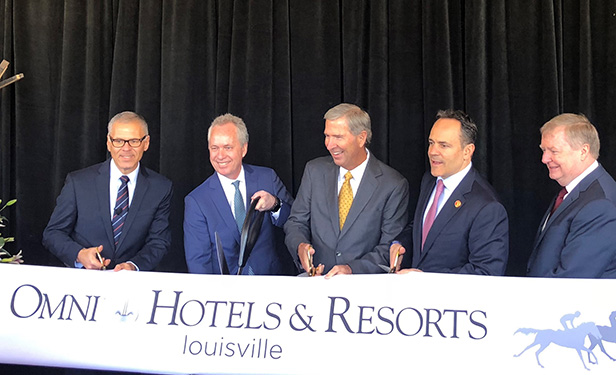 The addition of the Omni, along with six additional hotels that have opened in the past 18 months, has increased Louisville’s hotel inventory to 19,400 rooms.

Sixteen additional hotels are currently under construction in the city, with 14 of them expected to be completed by early 2019, elevating the city’s room capacity to nearly 21,000.

The timing of the new Omni hotel is bolstered by the renovation and expansion of the Kentucky International Convention Center, slated to be completed and re-opened Aug. 1 – a week before TSNN will celebrate its 9th Annual TSNN Awards at the facility Aug. 10-12.

Upon completion of this project, the Louisville Convention & Visitors Bureau will be able to offer a downtown convention package that will include a remodeled convention center with more than 200,000 sq. ft. of exhibit space and nearly 6,000 rooms within walking distance of the seven Urban Bourbon Distilleries, the restaurants and retail of Whiskey Row, the 10 attractions of Museum Row and the Fourth Street Live! entertainment and retail complex.

“Between the opening of the luxury Omni Louisville Hotel and the renovated Kentucky International Convention Center, 2018 is the perfect storm boosting Louisville’s transformed convention hotel package to new heights,” said Karen Williams, president and CEO of the LCVB.

She continued, “We forecast that this new infrastructure will grow Louisville’s convention market potential by 25 percent. We have so much to look forward to and have already booked several high-profile convention industry shows, ensuring we get this new hotel product in front of meeting planners and trade industry executives.”