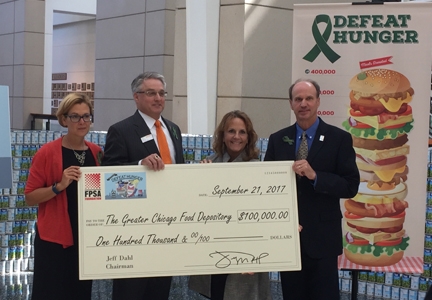 The Foundation of the Food Processing Suppliers Association (FFPSA) presented a donation of $100,000 to the Greater Chicago Food Depository during PROCESS EXPO last week.

The donation, a result of its DEFEAT HUNGER Campaign, included food products donated by PROCESS EXPO exhibitors and money raised through virtual donations, which is the equivalent of 400,000 meals, and will be used to help fight hunger in the Greater Chicago Area.

The presentation took place during PROCESS EXPO, a trade show dedicated to all segments of the food and beverage processing industry, that took place at McCormick Place Complex in Chicago.

"Today, I am honored to present a $100,000 donation on behalf of the FPSA Foundation to the Greater Chicago Food Depository. We are thrilled we were able to reach our 2017 goal of providing 400,000 meals for those in need of food in Cook County and the great city of Chicago," Dahl said.

He added, "I am delighted to announce that our combined efforts since the inception of the DEFEAT HUNGER program in 2013 have now resulted in contributions totaling nearly 1 million meals."

"We are so grateful for the incredible support FPSA provides those struggling with hunger in Cook County," Maehr said. "The Defeat Hunger initiative fuels the Food Depository's response as we provide food - and hope - for our neighbors in need."

They do this in partnership with 700 agencies and programs including pantries, soup kitchens, shelters and responses for children, older adults and veterans. This network distributes food where it is needed most throughout Cook County.

Every day the Food Depository distributes the equivalent of 164,000 meals.