A Little More MAGIC - Attendees, Exhibitors, Space All Up 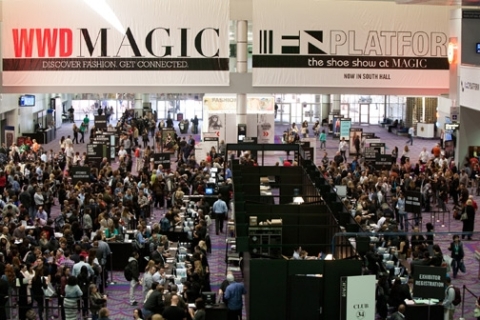 Although the retail industry hasn’t fully recovered from the gloom and doom of recent years, there were green shoots of promise growing at Advanstar Communications’ MAGIC Marketplace, the world’s largest trade show for the fashion industry.

Show representatives were unable to release attendance figures by press time, but expectations were for the event’s attendance to be well above February 2011 participation, when more than 60,000 attendees converged at the show, according to Chris DeMoulin, MAGIC International president and executive vice president of Advanstar’s Fashion Group.

“Our show has been growing since the post-recession 2009 show, and we’ve been growing ever since,” DeMoulin said.

He added, “Now, I think there’s this general sense that we’ve finally turned a corner. Consumer confidence is up a little bit (and) unemployment is down, so we can be bullish in 2012. We’re seeing that reflected in booth sales and in the excitement level.”

In an effort to keep that positive energy flowing, MAGIC continues to add more value in the form of new floor sections, events and activities, as well as a deeper foray into the social and digital world to connect with a broader audience and extend the life of the event for the fashion community, DeMoulin said.

Although DeMoulin added there are many exciting plans for the show ahead, it appears he won’t be overseeing the implementation.

According to a recent announcement by Advanstar, Tom Florio, former Conde Nast executive and Vogue publishing director, will be taking the helm of the show as CEO of Advanstar Fashion Group, while DeMoulin will be transitioning to executive vice president of customer development and president of licensing.

Neither Florio nor DeMoulin were available for comment by press time on the executive changes.

On a busy, energetic showfloor, exhibitors and attendees alike said they had indeed noticed a pick up in the show this year.

Exhibitor Karen Castellano, senior account executive of Yummie, said she was pleased with both the traffic, as well as the gradual recovery she was seeing in her industry.

“Business has been good, the general outlook for most of the stores has been better than it has been in the past couple of years and there’s a lot more people opening stores, which has been promising,” Castellano said. “I have pretty positive expectations for the show and the industry.”

Attendee Koko Ward, owner of A Walk In the Woods, said that even though many of her colleagues were still hoping for better days ahead, her store had had its best year ever in 2011.

“My business has been good and so far the show has been good,” Ward said. “The selections are good, the prices are good and there are new companies here, which is good. When my feet start to hurt, things might not be so good.”

Kuala Lumpur Eyes More Exhibition Space
The Malaysian government has expressed its interest to expand the number of exhibition venues in order to attract more world-class events. Comments were made by the…
Texworld USA Sees Increases in Attendees, Exhibitors
When Messe Frankfurt’s Texworld USA recently wrapped up Texworld USA July 24-26 at the Jacob K. Javits Convention Center of New York, it saw an increase in both…
World of Concrete Sees Jump in Exhibit Space, Attendees
After a tough couple of years grappling with the downturn in the economy, Hanley Wood Exhibitions’ World of Concrete had a stellar show when it ran Jan. 24-27 at the…
Exhibitors Up 24 Percent at All China Leather Expo
This week, the All China Leather Exhibition (ACLE), an annual international event for the leather industry, concluded at the Shanghai New International Expo Centre. The…
World Dairy Expo Adding More Space to Meet Demand
The Madison, Wis.-based World Dairy Expo, annually held at the Alliant Energy Center, has so much pent-up demand for indoor exhibition space, a new, temporary Trade Center…
Space Sold at AWE Up More Than 20 Percent in 2012
The AsiaWorld-Expo (AWE) has announced another year of business growth with space sold at the venue increasing by more than 20% for a second consecutive year. In total, more…