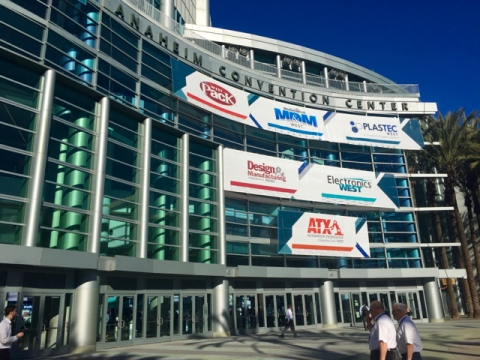 This year’s Medical Design & Manufacturing (MD&M) West conference at the Anaheim Convention Center not only saw more attendee, but also they were engaged in a variety of ways on the showfloor.

The leading medical manufacturer’s conference was held Feb. 9-11 and drew an estimated 22,000-plus attendees, more than 2,200 exhibitors and 380,000 square feet of exhibitor space at the Anaheim Convention Center.

“We have seen an increase on all three fronts from last year. We are ahead on number of attendees, number of exhibitors, and we sold out our exhibit space,” said Stephen Corrick, senior vice president at UBM Canon, which owns the show.

He added, “I think our conference continues to gain popularity as we have transitioned from mainly transactional to more of thought leadership and innovation. Attendees come to see not only what is, but what is possible.”

Several attendees agreed with the value of attending and seeing what is new.

Attendee John Kendall, senior supply chain manager at Unilife, said, “This is my second day on the showfloor. There was so much to see yesterday, I needed the second day to meet with my suppliers. It was almost overwhelming, but still a great use of my time. This show cannot be missed.”

MD&M West is one of six shows that all were collocated in Anaheim: PLASTEC West, WestPack, Pacific Design & Manufacturing, ATX (Automation Technology) West and Electronics West.

Industry trends continued to be around 3D printing, advances in robotics, such as collaborative robotics, and safety in the manufacturing process and output.

“Sawyer is our high performance robot. This is a true application of collaborative robotics. The robot arm is worked by its human counterpart, and does not have to be behind a protective glass and stopped when a worker comes into the area,” he added. “Workers and Sawyer work side-by-side for high performance tasks. And showcasing our new product at the MD&M West show was a clear choice for us. We have had a great reception, and many attendees are coming by our booth to have a hands-on experience with Sawyer.”

With new regulations and restrictions, including water restrictions and chemical effects on global warming, another topic was around new sterilization techniques.

Jay Tourigny, senior vice president at MicroCare, found a lot of attendees interested in their booth.

“We are seeing more regulation in sterilization, and process validation is more complex than ever. With our solvent compounds, sterilization can be safer, non-toxic, and customized to sterilize more difficult substrates,” he added. “It is great to show at MD&M West. We get great engagement and can help manufacturers understand their options.”

Popular educational choices at the conference included two presentation theaters, both on the showfloor: the Center Stage, which had presentations throughout the day, and the Tech Theater, which had product demonstrations.

These two theaters were a hit at the show. First-time attendee Greg Jones from Advent Certification Consultants agreed.

“I was so impressed with the level of education and engagement at the show,” he said. “Having the Tech Theater and Center Stage right on the show floor allowed me to go seamlessly from talking to exhibitors to catching a great presentation. I was even catching talks that weren’t directly related to me, and maybe not something I thought of attending, but ended up sparking additional conversations.”

The shows on the West Coast (Anaheim and San Jose) are in proximity to roughly 75 percent of the manufacturing base.  But that has not stopped MD&M show from looking at other potential locations.

Next year’s MD&M West will take place Feb. 7-9 at the Anaheim Convention Center.