Messe Frankfurt Ramps Up Its Campus Electromobility with Zero-Emission Vehicles 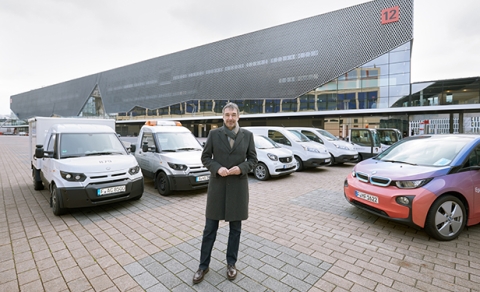 Messe Frankfurt — known as the world’s largest trade show, congress and event organizer — has deployed electric StreetScooters transport vehicles for deliveries on its exhibition campus. As part of a two-year trial, the zero-emission vehicles are being used for Messe Frankfurt exhibitors and visitors.

With an area the size of 90 football fields comprising 11 exhibition halls, more than 90 conference rooms and 26 restaurants, the Messe Frankfurt exhibition grounds are a veritable “city within a city.” It offers services including booth construction, visitor marketing and catering, ensuring the need for large amounts of deliveries, and not only during international flagship trade shows.

Thanks to the acquisition of the three StreetScooters, it will be possible to make some of these deliveries electric without any emissions.

“Now, carpeting, signage and even break-time snacks can be moved around the exhibition grounds in a climate-neutral manner by Messe Frankfurt’s service partners,” said Uwe Behm, executive board member for Messe Frankfurt.

He added, “With the deployment of StreetScooters, the company has made an investment in the improvement of its ecological footprint.”

As part of its ongoing CSR and sustainability mission, the exhibition campus has been promoting electromobility for the past eight years, including the purchase of the first electric Mercedes-Benz A-Class sedan in 2011 and the use of a hydrogen fuel-cell vehicle on the exhibition grounds.

Today, Messe Frankfurt’s fleet boasts multiple electric cars, and its 13 charging stations on expo grounds are available for trade show exhibitors and visitors to use.

Messe Frankfurt’s sustainability activities also include increasing its renewable energy generation. With the completion of the new Hall 12, the company has installed its third — and largest — solar power system on the exhibition grounds, with 5,300 modules generating 1,087 MWh every year, enough to power 241 single-family homes.

In addition, the photovoltaic systems on the roof of Hall 10 and the Rebstock multi-story car park yield an average of 900 MWh of solar energy per year, enough to supply the needs of 200 households.