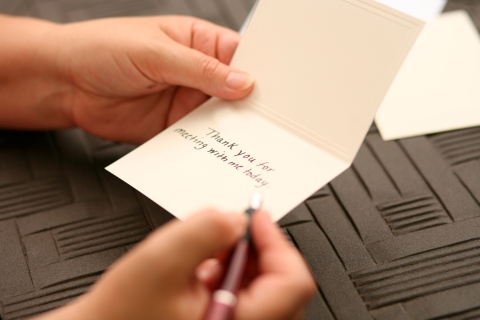 Out with the old? Not so fast … While digital and data may be getting all the buzz these days, a few, let’s call them “experienced” tactics, are quietly getting the job done for many event marketers.

So before throwing out your old marketing plan, consider keeping some old-school workhorses that these event planners swear by.

Although her company incorporates the latest technology and trends into its events, from virtual reality to artificial intelligence and interactive engagements, there are some traditional touches for reaching attendees that still work, according to Sarah Sebastian, owner of Rose Gold Collective.

She continued, “A lot of events/ conferences include a welcome gift or room drop. I suggest and often have, a handwritten note for the guest from either the speaker, host or personality. It’s that extra touch that does go a long way in a high-tech world, and we see sometimes more social posts about their welcome package and handwritten note than the event itself planned.”

Since the explosion of digital media tools, many think telemarketing is obsolete, but the truth is that telemarketing still is generating results.

“We use telemarketing for many of our clients’ campaigns,” explained Heather Ireland, manager of client accounts and strategy at Frost Miller.

She added, “It helps catch the attention of people who might have brushed aside the emails because there’s less clutter to cut through.”

Ireland recommends contacting prospects that haven’t registered for an event toward the end the campaign or just before an important deadline, such as an early registration deadline, in order to give them a little push.

The contact can be a live call during which the caller offers to help register the person immediately or a recorded voicemail reminder from an organization leader.

When marketing its four-day educational conference for wine professionals and enthusiasts, SommCon Producer Michelle Metter, partner at Fast Forward, believes a combination of new media tactics along with some “old school” disciplines are key to driving audience registrations.

Tactics such as justification letters, peer referrals and in some instances, direct mail, can still be effective, Metter added.

“While direct mail gets a bad rap at times, we do find that highly targeted communication to an audience that is pre-qualified works when combined with other strategies,” she said.

Metter continued, “For us, it is about delivering useful content that drives behavior, so when combined with our content marketing, social media and digital marketing strategies, these tools make sense to still be part of our arsenal.”

“Pitching, press releases and action alerts are old tools and methods of PR, but they’re still incredibly helpful in raising awareness about an event,” Gilgus said.

He added, “While the rise of digital media has forever changed the landscape of PR, pitching print journalists is still worthwhile since print publications can have a much stronger following and loyalty than online media sources. No public relations campaign should forgo the power of print media and its ability to inform and attract potential participants and customers to an event.”

“Word-of-mouth marketing is still one of the biggest influences on buyers,” Dugan said.

He continued, “People want to be treated like people by the companies they do business with, and that’s one of the primary reasons genuine testimonials carry so much weight with buyers.”

By including traditional marketing tactics to support their digital efforts, event planners can create a full package of communications for prospective attendees that can reap big rewards.

“It’s even better when the traditional tactics gain social media shares, which is the perfect combination!” Sebastian said.