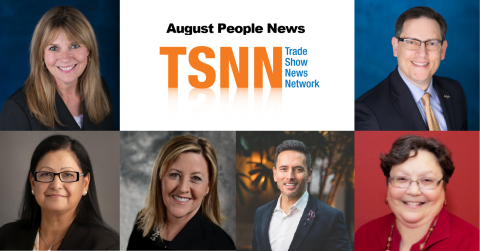 New appointments, promotions and awards have kept leading industry names in the news this summer, despite the ongoing pandemic continuing to make deep impacts on events. Take a look at some positive news:

Susan Schwartz was named IAEE’s 2020 Legend of the Industry on Aug. 7. Each year, this award is selected from IAEE members who’ve made remarkable contributions in innovation and leadership. Schwartz is managing director and co-founder of ConvExx, an independent exhibition management company in Henderson, Nevada.

John Bacon, senior group publisher with McLean, Virginia-based Naylor Association Solutions, was appointed to the board of directors for Texas Society of Association Executives in July. He will serve a three-year term.

Los Angeles Tourism & Convention Board has named Adam Burke its new president and CEO. A seasoned tourism executive with more than 25 years of industry experience, Burke joined the organization as COO in 2016. He had previously served as interim president and CEO since April after Ernest Wooden Jr. announced his retirement, which became effective June 30.

Chicago’s Kimpton Gray Hotel promoted Joel Contor to director of sales and marketing. He’s worked with the Kimpton brand since 2016, starting as sales manager with Kimpton Journeyman Hotel in Milwaukee.

Venue management company Spectra named Jeffrey Goldenberg general manager at Carteret Performing Arts and Events Center in New Jersey, effective July 27. He brings more than 20 years of industry experience to his new role, most recently serving as GM of the House of Blues in Boston.

Michael Guerriero, previously of Experient, a Maritz Global Events Company, joined Digitell as president this month. In this role, he works closely with CEO Jim Parker to support the growth of the Jamestown, N.Y.-based live streaming and virtual conference company.

Long Beach CVB in California has hired Debbie Glenn as a national sales director, working remotely from Maryland. A seasoned tourism professional, Glenn served as sales director for the Los Angeles Tourism & Convention Board for the past 14 years.

Sean Verney was named area general manager for Walt Disney World Swan and Dolphin Resort in Lake Buena Vista, Florida, last week. He brings experience from a career spanning more than 35 years to his new role, which includes overseeing all aspects of the 2,270-room resort with 333,000 square feet of meeting space — plus the expansion of a new 14-story tower expected to open next year.

Mindy Abel has been named new deputy director of Anaheim Convention Center in California. She brings more than 35 years of experience to her new role, where she’ll oversee sales and services as well as lead all front-of-house, client-facing departments and partners at the convention center.

Phil Hobson, president of Phoenix International Business Logistics, was recently appointed to a three-year term as a member of the board of governors with the NY/NJ Foreign Freight Forwarders and Brokers Association, one of the oldest transportation-related organizations in the United States.

People News: Destinations International, IAEE, Offprice and More Make Hires
Summer’s coming to a close, the kids are back in school, and companies in the meetings and hospitality space are ramping up hires for the last third of the year. Take a look…
People News: Corcoran Expositions, MCI USA, Event Tech Tribe, CVBs and More Make Hires
May and June have been busy months on the hiring front. From many new promotions and hires at CVBs around the country to expanded sales teams, new association leadership, DMO…
People News: Events Industry Council, Caesars, ProExhibits and More Make Hires
April showers brought May new hires to many companies in the trade show and destination marketing world. Here’s all the news you need to know. Big news for the Events…
People News: Meet AC’s New CEO, Plus Fresh Hires at Reed Exhibitions, 42Chat and More
While this summer’s hiring news isn’t as busy as in other years, companies in the events industry are expanding where they can to help gain a cutting edge for events as they…
People News: SHOT Show, National Grocers Association and More Make Hires; 8 New CSEPs Awarded
Summer may be the season for out-of-office notifications and slower days, but not so in the trade show industry. Catch up on the latest flurry of hires and promotions the…
People News: Core-apps, L.A. Convention Center, Comexposium and More Make Hires, Promotions
In the past, companies typically slowed down with their hiring and other employee changes throughout the summer months, but not anymore. Now, it’s full steam ahead all-year…