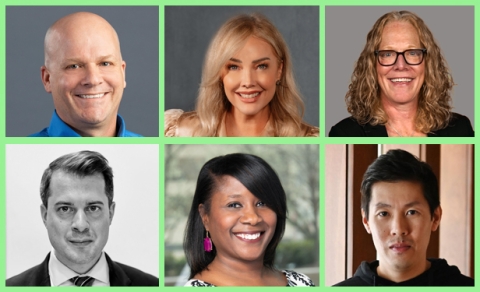 Event industry suppliers, CVBs, marketing and tech companies throughout the U.S. and abroad are fine-tuning their departments and promoting team members as the industry continues its robust hiring and promoting trend. Take a look!

Bringing extensive experience leading brand-building strategies in the events and experience sector, Faircloth previously spent just under six years at Freeman, most recently serving as global vice president, managing director, EMEA Agency services, in which she oversaw all sales, marketing and operations strategies. She also founded and launched Freeman’s Women of Agency initiative, which aims to support and empower women across all professional industries.

Spiro also recently named John Trinanes chief creative officer, a role in which he will draw upon more than two decades of industry experience to spearhead the new agency’s strategic and creative direction. A seasoned, award-winning marketing professional, he brings extensive knowledge leading and inspiring creative teams in experiential, digital and traditional advertising to his new role.

Before coming to Spiro, Trinanes held similar senior creative leadership roles at Stadiumred Group, Opus Agency and George P Johnson, where he was the senior vice president of creative for one of the largest, most talented and diverse creative groups in the experiential industry.

VSef, the global data format for digital event technologies, has named Stephen Knowles CEO. He brings more than two decades of experience working with some of the most dynamic events businesses, including CloserStill Media, UBM (now Informa Markets) and IQPC, helping to launch event brands into new markets and sectors.

Knowles takes the helm from Mark Brewster, who has led VSef since its inception in early 2021 and will continue to serve as chairman of VSef and CEO of Explori, the event measurement business he founded in 2011.

IAAPA, the global association for the attractions industry, recently promoted 30-year industry veteran Michael Shelton to vice president and executive director of the IAAPA North America (NA) region, responsible for continuing the development of the NA regional office and further expanding its regional services and products. An IAAPA team member since 2018, he most recently served as the director of education, safety and membership for the NA region.

Prior to joining the association, Shelton served as the managing director at Hyland Hills Parks & Recreation District in Denver, where he was instrumental in the planning and development of new attractions and expansion projects for the park district. Prior to that, he was general manager for the Ice Centre at the Promenade in Westminster, Colo., and general manager of Water World in Denver. He also served as the food and beverage director for Hyland Hills Parks & Recreation District early in his career.

Choose Chicago has welcomed Shavonne Harding to its convention sales department’s East Coast team as a national sales manager. Based out of Washington, D.C., she is responsible for overseeing sales, marketing and event management.

Harding joins the CVB from Visit Baltimore, where she was regional director of sales for the last four years. Prior to that, she served as a sales marketing manager with The Freeman Company, corporate events manager with Amazon Web Services, and sales manager at Mid-Atlantic/East with Destination DC, where she started her destination marketing career in 2014 and was promoted to conference sales manager within a year.

Rowe joined the company in 1987 as a CORT Workplace sales representative and during his tenure has been instrumental in forming and leading many of the company’s customer segments.

Leading venue event strategy and management company ASM Global has appointed 16-year industry veteran Charles Beirne general manager of the Fort Lauderdale/Broward County Convention Center, which is undergoing an extensive expansion project set to be completed in 2025. Bringing a wealth of experience to the Florida venue, Beirne has worked at the company since 2006, most recently as general manager of the Long Beach Convention & Entertainment Center in Long Beach, Calif., where he also oversaw a $60 million capital improvement and expansion project.

Prior to Long Beach, Beirne served as general manager of the Atlantic City Convention Center, a position he held from 2004-2012. He also led the opening of the Irving Convention Center at Las Colinas in Irving, Texas.

ASM Global also recently expanded its content team with the key hire of concert promotion veteran Duc Nguyen as vice president, global content programming. Nguyen is tasked with content generation for its arenas, stadiums, theaters and convention centers, under the leadership of industry veteran Global Chief Content Officer John Boyle. He will be based in Las Vegas.

Nguyen previously served as vice president of bookings at Allegiant Stadium, and prior to that, was a talent buyer at Live Nation, where he was responsible for booking shows in venues throughout Pennsylvania and Atlantic City.

Heller boasts more than 15 years of marketing and communications experience. Prior to joining the PHLCVB in 2019, he served as vice president of brand strategy and creative content for the Philadelphia Flyers. During his nine seasons with the team, he also led the Flyers mascot project that resulted in the creation of “Gritty,” sparking national and international media interest and elevating the Flyers’ brand recognition.

RCP London Events has appointed James Fisher as its new general manager, responsible for managing the venue’s event services operations as well as ensuring financial success, recruitment and retention of workforce and working with clients. His key focus this year will be to review, rebuild and refocus the historic venue’s post-pandemic procedures.

A former head of hospitality at independent hospitality service provider BaxterStorey and Goldman Sachs, Fisher started his hospitality career as a pastry chef at some of London’s most luxurious hotels and restaurants, working his way up to head of pastry with the Admirable Crichton before transferring his skills and knowledge to front-of-house operations. Following this transition, he was involved with creating the in-house catering operation at Tobacco Dock, curating multi-faceted events and experiences for some of the world’s leading brands.

Reporting to Shoppe Object Show Director and IMC Vice President Jesse James, Feld will focus on strategic marketing. In the digital space, her role will include the enrichment and oversight of the Shoppe Object website and ecommerce marketplace, along with the development of social media strategies and content creation team management. She will also have a collaborative leadership role alongside James and Sales Director Renata Bokalo in strategic product category expansion, targeted brand recruitment, on-site experience development and buyer acquisition.

Leading LED display provider INFiLED has hired Jon Chavez as regional sales manager, responsible for covering the central region of the U.S. for both fixed installation and the rental and staging markets.

Based in Nashville, Chavez started his career at TMB as a product specialist working with entertainment production, media servers and lighting. He then went on to project management and technical sales for VER and PixelFLEX LED, specializing LED installation projects and emerging technologies. His most recent position was at Amazing Industries, working with event designers in Dallas, Nashville and Los Angeles.

Visit Seattle has welcomed Peter Andersen as senior director, convention strategy. Acting in a revenue manager role for all business generated by both the Visit Seattle sales team and the Washington State Convention Center (WSCC) team, he will be responsible for maximizing the attendance and room night production of group business utilizing the WSCC to produce maximum citywide compression and direct optimizing revenue and space at the venue.

Bringing more than 12 years of experience and a wealth of knowledge in revenue management fundamentals, Andersen most recently served as the area director of revenue with Kimpton Hotels in Seattle and Portland. Prior to that, he was regional director of sales and marketing with InterMountain Management, responsible for eight franchised properties in Washington and Oregon, and prior to that, served as director of revenue management at the Fairmont Olympic Hotel in Seattle for more than six years.

Venue hospitality and management partner Sodexo Live! has appointed Nicole Hobby as its new vice president of marketing for North America. Bringing more than three decades of experience to her new role, Hobby recently spent more than 18 years with Ticketmaster across a variety of roles, previously serving for more than a decade in a senior leadership role for Feld Entertainment.

In her new role, Hobby will focus on the deployment of Sodexo Live!’s brand positioning, value proposition and brand as well as its digital-first strategy and offer development, and will participate in the creation of new services. She will also be heavily involved in helping drive new business, retaining and cross-selling to existing clients.

Based out of Denver, Hobby will work closely with CEO Steve Pangburn and all members of the executive leadership team in North America as well as liaise closely with global colleagues.