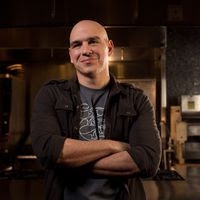 The 5th Annual TSNN Awards: Celebrating Trade Show Excellence will feature a bevy of well-known personalities, including CEO of the NBA Cleveland Cavaliers Franchise – Len Komoroski, who will give the luncheon keynote; Celebrity Chef Michael Symon, who will host the Sunday Brunch; and Meteorologist Betsy Kling, who will be the event’s emcee.

All three will take part in a celebratory weekend Nov. 14-16 in Cleveland that will kick off Friday night with an opening party and afterglow, with a conference and luncheon the next day, followed by the awards gala and afterglow that evening and capped off by a Sunday Brunch.

“We are absolutely thrilled by the support that the local Cleveland community has given to ensure that attendees to the TSNN Awards have a memorable experience in their city,” said TSNN President Rachel Wimberly.

In addition, he oversees all business operations and business-related endeavors for Cavs majority owner Dan Gilbert’s family of sports and entertainment interests in Ohio. He also is a principal in Rock Gaming, which operates Horseshoe Casino Cleveland.

He will be speaking in front of more than 50 show organizers representing some of the largest and fastest-growing shows in the U.S. after the lunch on Saturday at the Global Center for Health Innovation.

Chef Michael Symon, who will play host for Sunday’s Brunch at the International Exposition (I-X) Center during the Fabulous Food Show, grew up in a Greek and Sicilian family.

The Cleveland native creates boldly flavored, deeply satisfying dishes at his four restaurants in America’s heartland: Lola, Lolita, Roast and B Spot. He also shares his exuberant, approachable cooking style and infectious laugh with viewers as an "Iron Chef” on the Food Network and ABC’s “The Chew”.

Symon published his first cookbook, Michael Symon’s Live to Cook: Recipes and Techniques to Rock Your Kitchen, in 2009, sharing home cook-friendly recipes that draw on the flavors of his heritage.

Symon will do a Q&A with the attendees, and they’ll learn more about the passion he has for cooking.

Another Cleveland native, Betsy Kling, who is the weekday and evening meteorologist for the local NBC affiliate – WKYC, will emcee the TSNN Awards Gala Celebration Sat. Nov. 15 at which the overall fastest shows in different categories, as well as other awards, will be given out.

In 2007 Kling was awarded first place by the Ohio Associated Press for Best Regularly Scheduled Weather.

Kling is part of a small group of women in the country who have earned the prestigious Certified Broadcast Meteorologist (CBM) accreditation from the American Meteorological Society, as well as the Seal of Approval from the National Weather Association (NWA). She is a full member of both professional organizations.

Additionally, she is active in the NWA and sits on several committees, including the Broadcast Meteorology Committee, and is an evaluator for Seal of Approval applicants. She also organizes fundraisers to support NWA college scholarships for aspiring meteorologists.

Previously, Kling was elected as a NWA Councilor and was honored with the National Weather Association's Member of the Year award for 2004.

For more information on the TSNN Awards please visit www.T-awards.com.

Record-breaking Crowd Celebrates Fastest-growing Shows at the 2014 TSNN Awards in Cleveland
The National Society of Genetic Counselors Annual Education Conference was named the overall fastest-growing show in net square footage and UBM's Medical Design &…
Hometown Chef Michael Symon to Headline Cleveland I-X Center’s Fabulous Food Show
Iron Chef and Cleveland Native Michael Symon is heading back to his roots Nov. 14-16 to headline the International Exposition (I-X) Center’s Fabulous Food Show.Fabulous Food…
ASAE’s Annual Meeting Will Feature Closing Keynote with Chef Jeff Henderson
The American Society of Association Executives unveiled several of its game changers, as well as its closing keynote with Chef Jeff Henderson, who all will take part in the…
2018 TSNN Awards Will Celebrate in a “Transformed” Louisville, Ky.
The 9th Annual 2018 TSNN Awards: Celebrating Trade Show Excellence will head Aug. 10-12 to Louisville, Ky., to celebrate the top U.S. fastest-growing trade shows in net…
Join Us for #Expochat Nov. 2: TSNN Awards: Education, Inspiration, Celebration
If you have not been to the TSNN Awards to participate in the industry's original weekend for Celebrating Success, let us help you gain some of the same Education and…
2019 TSNN Awards Fastest-growing Shows Unveiled for Dallas Celebration
Celebrating its 10th Anniversary, Trade Show News Network will hold its prestigious and original TSNN Awards program, which honors the top fastest-growing shows in attendance…