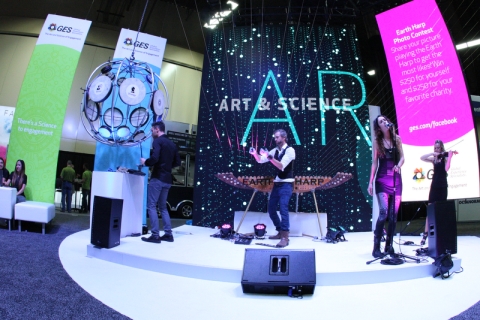 The star of the show? A giant Earth Harp at the Global Experience Specialists’ booth that lured attendees to the back of the hall. The moment William Close of the Earth Harp Collective touched the strings rigged to the ceiling, attendees whipped out their cellphones to record and share.

Since the instrument took up pretty much the entire exhibit, the GES booth became an ‘unbooth’ and staffers equipped with iPads working around the perimeter.

“With large crowds, the use of hand-held iPads gave our team the freedom to easily engage with attendees right where they were,” said Gina McDuffie, GES senior vice president of marketing.

She added, “All of the technology worked seamlessly together to create a very unique and memorable experience for our guests and team.”

The theme of an ‘unbooth’ continued at IQ 3D, where a completely white exhibit sported the sign “Where’s the booth?” Attendees were invited to put on a Google Glass and voila! a virtual exhibit appeared all around them.

“We originally developed this software to explain projection mapping to our clients by putting it into a 3D environment,” said Jason Sankey with IQ 3D.

He added, “But then it turned out that it can also work well for exhibit designers who can use it to see what an exhibit will look like before it’s built.”

The app runs on Android and Apple. The designs are stored in the cloud, and stakeholders are given an access code for the app on their devices. In the future, Sankey envisions the application also expanding into Oculus Rift, a virtual reality tool, offering another dimension for interaction.

Across the hall, Blue Telescope was already sending attendees on a space ride in an Oculus Rift visor.

“Unlike with Google Glass, there’s nothing to distract you,” Blue Telescope’s Marcos Stafne said. “We’re seeing a lot of our clients wanting to immerse their attendees into a 3D reality. It can be a factory walkthrough. It doesn’t have to be an attraction like an outer space adventure.”

A ‘selfie on steroids’ was gathering a crowd at the Pixe Social space, where attendees could get their photo on the cover of Exhibitor magazine, even if just for sharing on Facebook.

“Attendees get green-screened and prompted to say why they love the brand,” said Michael Krantz with Pixe Social. “Instead of going to their personal page, the ‘photomonial’ then goes to the brand’s page, driving traffic and engagements.” The software tracks the reach and also creates opportunities for post-show engagement as attendees share their email to get a link.

Deeply integrated tech is becoming the norm for exhibit spaces, and attendees expect nothing less. “Our attendees bring experiences from their everyday lives onto the showfloor,” said attendee Sandy Cebulis with Parker Hannifin Corp. “They expect to be educated, and they expect immediate feedback and a takeaway.”

Cebulis was particularly impressed by the exhibit by Kaon Interactive that launched a 3D display application at EXHIBITOR. “I loved the animation and also loved it that they scan your badge and instantly you get an email with a link to their webinar,” she said.

At MG Design exhibit, tech also was helping to tell the story but cookies and coffee didn’t hurt either. “The scope of our work is shifting to creating comprehensive strategies, often with pre- and post-show communications,” said Rob Majerowski with MG Design.

From landing pages to interactive and digital content on the screens, the suite of services for exhibit companies now goes far beyond architecture, which still is important in capturing the attention and creating the brand presence. “At the end of the day, it’s still about creating environments that build relationships,” Majerowski said.