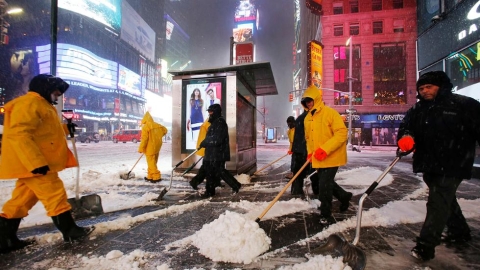 With Winter Storm Stella bearing down on the East Coast and the brunt of it striking today, trade shows up and down the East Coast from Atlantic City to New York City canceled or closed early.

On Monday, N.Y. Gov. Andrew Cuomo declared a state of emergency with parts of the state, as well as seven other ones, predicting blizzard conditions and more than 18 inches of snow.

"In preparation for blizzard-like conditions, I will be activating the State Emergency Operations Center and have directed state agencies to continue proactively preparing communities and roadways for this major storm," Governor Cuomo said before the storm moved in.

He added, "We remain in constant contact with local officials in every region, as New York prepares to aggressively clear roads, provide personnel and storm equipment as needed, and offer immediate assistance to communities across the state. I strongly urge everyone to limit unnecessary travel on Tuesday, and if you must drive, please plan ahead, be careful and stay safe."

“No meeting planner ever wants to postpone an event,” said Timothy Schneider, president and CEO of Schneider Publishing, which publishes Association News and organizes Meetings Quest.

He added, “But thanks to our great partners at Meet AC and the Borgata Hotel, Casino & Spa, we have been able to reschedule Meetings Quest within a few hours of deciding to postpone it. We look forward to offering our attendees the chance to experience what makes Atlantic City such an outstanding destination for meetings and conventions. Chief among those things are a world-class convention bureau and venues that truly understand the meetings industry.”

Even though the storm was downgraded in New York City to be 4-8 inches, several shows at Javits Center were impacted by the storm; JA New York, International Esthetics Cosmetics Spa Show, International Beauty Show, and MJSA Expo closed on March 13, instead of the scheduled March 14.

Event producers for Inside 3-D Printing have changed their show days to March 15-16. Show days for New York Build Expo will remain the same, also March 15-16.

The Shape America Convention and Expo, on tap March 14-18 at the John B. Hynes Convention Center in downtown Boston, was going on as scheduled, according to the show’s web site.

“At this time, there is no change in the schedule of events; however, we understand that there is uncertainty about travel during this difficult time. Member safety is SHAPE America’s top priority. Each individual must decide for themselves whether conditions are safe for travel,” the site read.

Shows Cancel in Wake of Hurricane Florence Impact on East Coast
Several shows have canceled at convention centers expected to be impacted by Hurricane Florence, which is projected to make landfall in the Carolinas as a Category 3 or 4…
C2 Melbourne Cancelled as Creator Suddenly Steps Down
C2 Melbourne was originally planned to be held from 17th to 19th October 2018, at Melbourne Convention and Exhibition Centre (MCEC). The event was eventually cancelled…
CoNEXTions 2015 Trade Show Cancels in Baltimore Amidst Violent Protests
As a result of violent protests in Baltimore that broke out following the funeral of Freddie Gray, who died while in police custody, the Door and Hardware Institute decided…
Several Trade Shows Canceled at Brussels Expo in Wake of Terror Attacks
After a trio of terrorist bombings rocked the Belgian capital, two at Brussels’ airport and another at a metro station, the city’s main exhibition venue – Brussels Expo –…
Pico Far East’s Revenues Down 4 Percent in 2017
Hong Kong-listed Pico Far East announced its annual results, for the year ended Oct. 31, 2017. The company reported total revenues of US$510 million, down by 4 percent year-…
Once Massive Computer Show CEBIT Canceled
Hannover, Germany-based mega-show CEBIT, which was focused on computers and in its height attracted up to 1 million attendees, will no longer exist as a standalone event,…