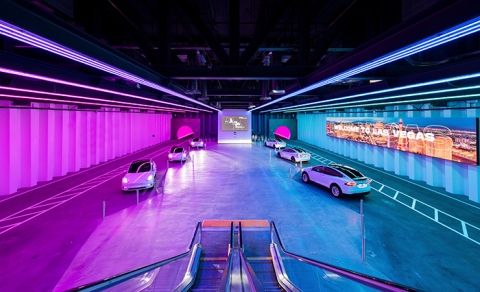 On Oct. 20, Elon Musk's tunnel company, The Boring Company, received unanimous approval by the Clark County Commission for a special use permit and franchise agreement for the proposed 29-mile tunnel transportation system, which will connect to the existing Las Vegas Convention Center (LVCC) Loop, the .8-mile, bi-directional tunnel underneath the LVCC.

Launched in June, the Las Vegas Convention Center Loop allows up to 4,400 convention attendees per hour to be transported across the sprawling campus in just under two minutes, free of charge. By foot, the walk would take approximately 25 minutes.

The granting of the special use permit allows The Boring Company to apply for and receive building permits to construct the proposed tunnels, while the franchise agreement allows the company to operate the system, collect passenger fares and oversee advertising and partnerships.

“We are very excited to take the next steps, working with Clark County leaders and our partners throughout Las Vegas, to build a fast, safe transportation system for this incredible destination,” said Steve Davis, president of The Boring Company, which will fund the Vegas Loop’s development, while passenger stations will be paid for by respective property owners.

According to Las Vegas Convention Center Authority (LVCVA) officials, there are plans for 51 Vegas Loop stations throughout the Las Vegas Strip and Clark County. The system is also expected to connect Las Vegas and McCarran International Airport, allowing passengers to travel directly to their desired location without stopping.

The Vegas Loop will not only be a must-experience attraction for visitors but also yet another example of Las Vegas continuing to innovate and transform itself, according to Steve Hill, president and CEO of the Las Vegas Convention and Visitors Authority.

“The Vegas Loop will be a game-changer for our visitors in moving them around our exciting destination quickly, conveniently and in an entertaining ‘Only Vegas’ way,” Hill said.

Besides the Las Vegas Convention Center Loop, the LVCVA also owns the Las Vegas Monorail, an elevated 3.9-mile system with seven stops throughout the resort corridor.