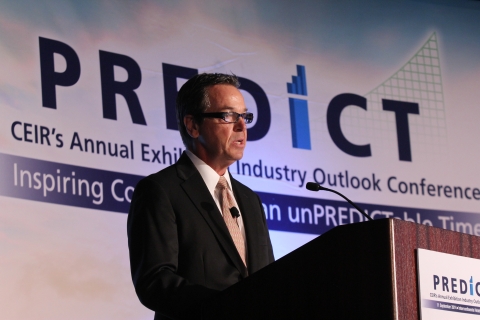 More than 110 C-level trade show organizers and suppliers gathered Sept. 11 in Chicago at the Center for Exhibition Industry Research Predict Conference to not only hear about how the overall U.S. economy is faring right now and into the future, but also about the health of the trade show industry and the sectors it serves.

Senior Analyst for CNBC and Financial Industry Expert Ron Insana hosted the event and first sat down with Access Intelligence CEO Don Pazour, who encouraged the audience to support CEIR and the research the organization does for the trade show industry.

First up to present was Ryan Sweet, senior economist for Moody’s Analytics, to kick things off.

He began with some good news: “We are going to see a noticeable acceleration of the U.S. economy, and it’s been a long time coming.”

Overall GDP growth will close out this year with a modest positive gain as well, and 2015 is predicted to see a 4 percent increase in GDP, he added.

The most growth worldwide still is expected to be in Asia, which is predicted to see a 5 percent increase for the next two years.

All of the news wasn’t bright, however, Sweet warned, “Europe makes us the most nervous. If they fall back into recession … it will affect us.”

He added, “The optimism really lies in the U.S.  When the U.S. economy rises, it lifts all boats.”

Sweet said some things to keep an eye on were the lagging consumer spending, a possible increase in inflation rates on the horizon, what the federal government may or may not do and a definite stock market correction in the future.

Brian Casey, president and CEO of CEIR, took the stage next and presented the latest CEIR Index numbers that track the overall health of the trade show industry in the second quarter, which saw 1 percent growth, though lagged behind GDP.

He added that although growth in the trade show industry is lower than what CEIR predicted for 2014, he still expects it to have a 2 percent uptick by the end of the year.

And the next few years look even better, Casey said.

He also added that attendance was on track to grow faster in future years, which is a “very good sign. It’s a leading indicator of the other three metrics (net square footage, real revenues and number of exhibiting companies).

For more on the full CEIR Index Report for 2Q 2014 please click HERE.

Here are just a few of the takeaways from those sessions:

-          Carleen Kohut, COO for the National Retail Federation, said the retail sector was “more modest than we expected coming into the year.” Both Kohut and her fellow panelist Anne Voller, vice president for talent acquisition at Macy’s, both said it’s all about what the consumer wants right now and engaging them through technology.

-          Marco Pardi, president of UBM Tech Events, said during the Communications and Information Technology sector that change occurs so quickly with the rapid pace of technology, they have a constant need to revamp their events. “It’s just not your grandfather’s trade show anymore.” Carol McGury, executive vice president of Event and Education Services, SmithBucklin, said of the future of live events, “People will talk online, but they will close business in person.”

-          During the Raw Materials and Sciences session, Hart Energy President and COO Kevin Higgins said they launched their first shale industry-focused trade show in 2006 and now their portfolio of several events brings in $21 million in annual revenue. Gene Sanders also had good news to share about the show he oversees – Society of Plastics Engineers’ Plastics Show. “Our show is bigger than it’s ever been,” adding that they are close to breaking 1 million net square feet.

-          Industrial and Heavy Machinery saw the biggest gains year-over-year as tracked by the CEIR Index so far in 2014, with 6.9 percent growth and it was reflected in the shows also on this panel from Society of Manufacturing Engineers and the Semiconductor Equipment and Materials Association. SEM’s Debbie Holden said, “It’s a great time to be in manufacturing.” She said their biggest concern right now is getting trained workers into the field.

The lunch keynote was given by Marina Gorbis, executive director of the Institute for the Future, and she talked about the way that people learn, work and govern all are being transformed in big ways right now.

She also said that in the past, only big companies could produce on a large scale, and now individuals or smaller workforces could do the same with the evolution of the Internet. “Uber is just the beginning, there are many others that are coming,” Gorbis added.

Relevant to show organizers, she talked about allowing attendees to crowdsource content, looking for ways to create exciting events off the showfloor and creating fans around events and engaging them in the right ways.

-          According to Jack Holmes, president of UPS Freight, the biggest issue they are grappling with right now is a driver shortage, otherwise, “as far as the industry goes, things are not that bad off”.

-          Hanley Wood CEO Peter Goldstone said the good news in the housing market is new home builds are up to 1 million, however to keep that recovery going, he added: “If you have kids 18-35, kick them out of your home” … basically so they could go buy one of their own.

The final official session of the day was moderated by Wilma Jordan, founder and CEO of The Jordan, Edmiston Group, Inc., and she interviewed Douglas Emslie, managing director of Tarsus Group, about his company’s M&A strategy.

Of the overall M&A market right now, Jordan said this year so far has fewer deals with smaller values, compared with 2013, but reminded the audience that last year included the $950 million acquisition of Nielsen Expositions (now Emerald Expositions) by ONEX.

She added that one deal coming up that might be of size in the trade show industry would be the sale of Advanstar Communications.

Emslie said Tarsus Group’s strategy when they are looking for a possible acquisition is to look for markets in transition, including emerging ones, such as China, Southeast Asia, Turkey, Middle East and Mexico.

Of China he added, “(It’s) a massive market. It’s the third largest trade show market in the world. It’s very competitive, but the good thing about China is the infrastructure is in place.”

Emslie said the Tarsus model when they buy a company/show is to retain the owner and the knowledge.

This strategy has paid off the past few years in Turkey, where they are the largest show organizer, when several copycats tried to take business away from Tarsus-run shows. But, because of the partnership with the original owners, he added, “we repelled them all.”

Priest-Heck said experience marketing at shows is “as relevant as ever,” adding that organizers need to let attendees take control of the event. “If we’re going to engage them, we’re going to have to take risks,” he said.

Audrain added that “trade shows are either growing or their dying” and encouraged the audience to keep their events fresh.

Slater said that also it was important to understand how to engage attendees during the days when there is no showfloor for them to be on. “You have to look at the overall experience when going forward with this,” he added.

Lastly, Priest-Heck said, “A lot of folks are still doing the same thing. I am fearful for those (who) don’t change.”

CEIR Predict Conference Focuses on What’s Transforming the Trade Show Industry
Washington, D.C - When the Center for Exhibition Industry Research’s CEIR Predict Conference was held last week in Washington, D.C., one thing was abundantly clear – as…
UFI’s Global Barometer Indicates Positive Trade Show Industry Growth
In the recently released Global Barometer survey conducted by UFI - The Global Association of the Exhibition Industry, the majority of trade show companies worldwide are…
CEIR TOTAL Index: Trade Show Industry Continues Its Growth Streak in Q1 2018
The Center for Exhibition Industry Research reports that the recent growth of the exhibition industry continued during the first quarter of 2018. The performance of the…
CEIR Reports 1 Percent Q3 Uptick in Overall Trade Show Industry Growth
Despite uncertainty on where U.S. trade negotiations stand with China, coupled with an unstable stock market and the global economy slowing down overall, the latest Center…
CEIR Index Report: Trade Show Industry Posts 18th Consecutive Quarter of Growth
For the 18th quarter in a row, the trade show industry saw an overall uptick in growth in the fourth quarter of last year of 1.7 percent, compared with the same quarter in…
CEIR Total Index: Q1 2020 Trade Show Industry Growth Drops 15 Percent
Growth of the exhibition industry plunged more than 15 percent during the first quarter of 2020 during which 72.6 percent of events originally scheduled for the second half…