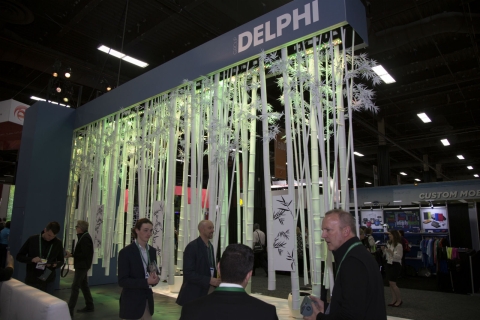 Walking the aisles of the EXHIBITORLive! 2016 showfloor at the Mandalay Bay Convention Center in Las Vegas last week can best be described as awe-inspiring, enlightening and engaging.

There are literally row after row of beautiful booths, with not only all the bells and whistles of the actual construction being shown off, but also some truly unique examples of experiential marketing to grab the attention of attendees walking by.

As the trade show for trade shows, EXHIBITORLive!’s showfloor and sessions are attended primarily by exhibit managers ranging from small companies with maybe a few shows a year to huge companies that exhibit at dozens of shows or more annually.

The entire focus of EXHIBITORLive in the 180 sessions and the showfloor is to give attendees the tools they need to take back to their offices and create a successful exhibit and marketing program.

Randal Acker, president of Exhibitor Media Group, which owns the show, said that successful attendee engagement in the booths at the show focused on “how do you create an experience that extrapolates demographic profiles to really develop a solution that meets their needs?”

He added that it was crucial to get the attendees integrated into the experience so they will be involved in the storytelling aspect of it.

“It’s not about the booths’ structure,” Acker said. “That whole build it and they will come mentality won’t work.”

Derse knew exactly who their primary audience was at the show – 20 to 30-year-old female exhibit managers. To engage with that demographic effectively, they built a wine bar and had wine tastings on the showfloor.

The wine bottles had case studies on the labels that challenged attendees to ‘aspire’ to create an effective exhibit program, according to Rick Stoner, Derse’s marketing director.

“We ask them ‘How do you aspire to a better way,” he added. “We try to bring it back to an exhibit strategy.”

Over in Group Delphi’s booth there were huge fabricated pieces of bamboo hung upside down with three pictures on each side that had QR codes embedded in them.

Once an attendee donned a pair of special augmented reality glasses, the pictures came to life with either butterflies that fluttered around, hummingbirds darting to different flowers or a panda bear that eat leaves and played.

“Philosophically, what we are about as a company is wanting to make a connection,” said Justin Hersh, the company’s CEO.

He added, “People go to live events for an experience. We want people to pause and say, ‘Wow, that was really something special’.”

Hersh said the overall reaction was “really positive” when people looked through the glasses and saw the moving images that they had created.

“You know you have the right experience when people have a childlike grin on their face,” he added.

At Czarnowski’s booth, the focus was on ‘unlearning and reframing’, according to Dillon Nagle, the company’s marketing director.

With that in mind, attendees had the opportunity to interact with “The Bumby’s”, who sat with headphones, scarves and sunglasses on and typed away on old word processors what their ‘instant appraisals’ were of attendees.

Nagle said the idea was to encourage people to not get stuck in the same way of thinking about their own exhibit strategies, but instead be open to a new way of perceiving them.

In the Global Experience Specialists’ booth, attendees had the opportunity to have their entire perception challenged by entering a virtual reality world.

“Our in-house, multi-media team has created numerous virtual reality experiences for our clients. Oculus Rift is the tool we have used to help clients, so we saw it as an opportunity for attendees to experience the technology first-hand,” said Jeff Quade, GES’ CSO.

He added, “Attendees were able to visit a virtual environment and explore a two-story exhibit. As they moved through the exhibit, they could change out the furniture, the texture of the walls and even trigger digital content.”

The first floor was full of musical instruments including guitars, drums, synthesizers plus a jazz ensemble, a rock and roll trio and a hip hop area, and when the user moved close to the instruments, one of them would play.

Upstairs, there were conference rooms where you could change out a table, play a video or change the color and texture of the walls.

“Attendees were fascinated by the many uses for this technology, and our team had terrific conversations with attendees about ways they can us virtual reality within their own exhibit program,” Quade said.

The company built an elaborate two-story booth complete with a radio station that featured daily podcasts about exhibit trends and other topics, a coffeehouse, beer pong, table daily study sessions focusing on different topics such as exhibit design and ‘honored alumni’, who were MG Design clients on hand to talk about their partnership with the company.

“It’s fun to watch people come through the entrance with smiles on their faces,” said Ben Olson, vice president of marketing. “We are really trying to do a great experience and make it as engaging as possible.”

Fresh Innovations in Attendee Engagement & Experiential Marketing Flourished at EXHIBITORLive 2017
Decked out with spring flowers, EXHIBITORLive 2017 offered a fresh take on attendee engagement and experiential marketing, blending ingenious design with seamless technology…
Freeman Launches New Products to Enhance Attendee Engagement
Event organizers today are using digital tools to provide better end-to-end experiences. Attendees expect convenience along with accurate, real-time information and crave two…
The Celebrity Factor: New Ways to Engage with Virtual Attendees
Now that the novelty of online and virtual events has worn off a bit, organizations are looking for new ways to keep their audiences engaged. Many are turning to a perhaps…
LIGHTFAIR International 2015 Breaks Showfloor, Attendance Records in New York City
In its 26th year, LIGHTFAIR International 2015’s show broke attendance and showfloor records across the board when it was held May 5-7 at the Jacob K. Javits Convention…
Creative Thinking and Digital Engagement Ruled the Day at EXHIBITORLive
From Warhol-themed terrariums to frequent flyer cocktails, the EXHIBITORLive 2018 conference and trade show inspired event and trade show marketing professionals to think…
Education Sessions Delivered at EXHIBITORLive! 2016
EXHIBITORLive! 2016 at the Mandalay Bay Convention Center in Las Vegas was all about educating and empowering the trade show and events industry.  With more than 80…