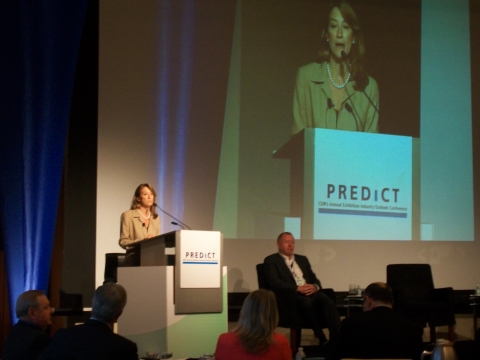 Even with the overall economic doldrums continuing – high unemployment, the collapse of the Eurozone and the unstable stock market, to name a few – the majority of show management executives who gathered at the inaugural Center for Exhibition Industry Research’s Predict conference, Sept. 15 in New York City, said their businesses not only were doing well this year, but they also expected a positive trend into 2012.

The one-day program drew a C-level crowd from for-profit and non-profit trade show companies, as well as economists, investment bankers and press to discuss where the global and U.S. economy is now, where it might be going and how it’s impacting the trade show industry.

“This (conference) really was a dream come true for us,” said Carrie Freeman Parsons, CEIR chair and vice chairman of Freeman. “CEIR has worked hard to serve the industry with data and relevant research.”

She added that there had been discussions for a while on putting an event together that would provide a more predictive tool for the industry, and the Predict conference was launched.

The day’s program was moderated by Galen Poss, COO of dmg::events, and the first session was led by John Walker, chairman and founder of Oxford Economics, who gave an outlook on the global economy and its impact on the trade show industry.

“There was a sharp recovery through 2010 and many people expected the recovery to keep on going,” Walker said. “They turned out to be wrong. The economy slowed quite sharply in the U.S. and world.”

He said several negative economic factors were in play, including a deep dip in the global stock market index, collapsing business confidence, declines in manufacturing, the tsunami and ensuing nuclear crisis in Japan, high commodity prices and problems in Europe, such as Greece’s possible default.

Walker added that even though the gross national product was trending upward this year in the U.S., Europe and Japan, compared with the last two years, “the growth next year will match five years ago, and this is not good. There will be problems.”

He said, “It’s difficult to predict what will happen because there are so many outside risks,” such as banks and some countries exposure to debt. There is good news for the U.S., though – it didn’t lend as much out to other governments, so the exposure is far less than some countries, according to Walker.

The next session took the economic outlook from the global level to the U.S. level, with Allen Shaw, chief economist and president of Global Economic Consulting Associates, presenting results from the CEIR Index and Jeffrey Werling, executive director of Inforum, focusing on economic stressors in the U.S.

One of the biggest long-term stressors on the U.S. economy is the chronic high unemployment, Werling said. “It’s the deepest post-war recession in unemployment,” he added.

Other stressors on the economy he pointed to were the still-struggling housing market and record number of foreclosures, as well as overall lack of consumer confidence.

Recovery from the financial crises and ensuing recession is protracted because of the long, slow process of deleveraging and the explosion of government debt, Werling said.

“In Washington, the politicians can’t seem to get it together,” he added. They not only can’t identify the problem, Werling said, but they also are unable to implement anything to solve it.

Shaw drew a somewhat brighter picture of the exhibition industry, compared with the troubles in the overall economy.

The CEIR Index, which uses data collected from shows to track the health of the trade show industry, indicated a 3-percent increase in attendance at shows in the first quarter of 2011, compared with the same period during 2010, though the growth slowed into the second quarter of 2011, with an only 1-percent increase, compared with the same quarter last year.

Shaw pointed out that the increases were good news for the industry because attendance is a leading indicator of a recovery, though certain sectors, such as building, construction and home repair, still were struggling with steep declines.

On the other hand, other sectors, such as government and education, are performing well, he added.

“For the first half of 2011, the exhibition industry outperformed the economy,” Shaw said. But, he too cautioned a weaker recovery moving forward.

There were several other discussions throughout the day on specific sectors within the exhibition industry, including one on Building, Construction, Home and Repair that included Gerald Howard, CEO of the National Association of Home Builders, in which he said the residential construction industry is not in a position to lead the country out of a recession and only one third of the construction business currently is being utilized.

After the morning’s discussions, which primarily painted a negative global and U.S. economic outlook, Poss said, “I came in the morning feeling pretty well, but now I have one, big headache. It’s not real good news.”

He added, “So far, we’ve looked at the macro … (when we) pull it back … the story is much more positive on our level.”

To prove the point he asked show management executives in the room to raise their hands if 2011 was a good year for them, and most responded positively. Poss took it a step further and asked if they expected next year also to be positive, and, again, most raised their hands.

In the afternoon sessions, U.S. Travel Association CEO Roger Dow gave a keynote on the travel sector and its historic importance to business, the exhibition industry, and the economy, including a discussion with David Loechner, president of Nielsen Expositions, about the Sporting Goods, Travel and Amusement Sector Transportation Sector.

Here are a few key points from the afternoon sessions that went more in depth into specific sectors within the exhibition industry, as well as the mergers and acquisitions market:

• the travel and tourism industry is worth nearly $2 billion, which is two-and-a-half times bigger than the auto industry
• because of pent-up demand, the automobile industry is expected to kick into gear with more manufacturing output in the third and fourth quarters
• a lot of companies balance sheets actually are pretty strong right now
• pop culture shows have been recession-proof
• showfloors are smaller because exhibitors are booking less space
• customers want to have more packaged services on the showfloor, instead of dealing with several vendors
• virtual events still are evolving, but won’t ever replace face-to-face events
• if you are a pure trade show company, you have to have a strong digital strategy to attract private equity interest right now
• associations are starting to realize that running a trade show is a risk business.