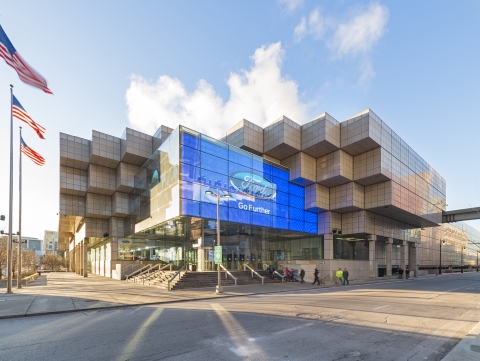 With the North American International Auto Show officially wrapping up at Detroit’s Cobo Center recently, this marks the end of a $279 million, five-year transformation at the venue.

Starting this spring, the terrace will be used for programming that includes art fairs, exercise and yoga, biergartens and other elements designed to connect Cobo Center to the community and the downtown Detroit culture.

It also will bring activity into the center between major events.

“I think the most important part of the reinvention of Cobo Center was the adaptive reuse of the old arena,” said Thom Connors, regional vice president of SMG and general manager of Cobo Center.

He added, “By cutting part of it away and creating a new atrium, it really tied the whole renovation together and gave the view from the main concourse out to the river and across to Canada. It brings people down to the newer, improved south side of the building and the majesty of the river.”

In addition, Cobo Center, which is managed by SMG, has grown its event roster, with 85 hosted in 2015, compared with 35 in 2010, a gain realized while the building was under construction.

The convention center now operates with 400 event days each year, double its pre-renovation amount of 200 days, and this year is on track to beat that record.

“The Detroit Regional Convention Facility Authority (DRCFA) began on a mission of regional cooperation and through the success of this renovation, became an example of what is possible when people work in consensus,” Larry Alexander, chairman of the DRCFA and CEO of the Detroit Metro Convention and Visitors Bureau.

He added, “Cobo Square will continue this important mandate, bringing people throughout the Metro Detroit region together in community celebrations.”