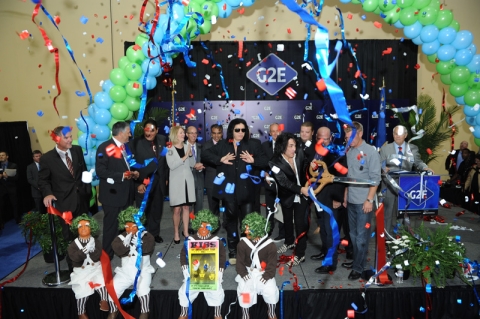 Holographic card dealers, CSI-themed slots and a "Judge Judy" mock courtroom were just some of the dazzling offerings at the Global Gaming Expo (G2E), the premier trade show and conference for the gaming and entertainment industry that took place Oct. 1-4 at the Sands Expo & Convention Center in Las Vegas.

Organized by the American Gaming Association and Reed Exhibitions, the event is back to its 2008 numbers, with 413 exhibitors taking more than 259,000 square feet of exhibit space – an increase of about four percent, compared with the 2011 event.

The attendance numbers were pending audit, but were expected to be "on par or better" than last year, according to show organizers.

"This is the first time we've seen significant growth year-over-year since 2007, and we are extremely encouraged by the sales numbers and what they mean for the casino gaming industry," Courtney Muller, senior vice president at Reed Exhibitions, said in a statement.

She added, "Additionally, G2E's attendance numbers are tracking ahead of last year's event, indicating a strong interest by industry buyers to discover new products and services that will contribute to the success of their businesses."

Increasing gaming revenues for the first months of 2012 and strong interest in online gaming are among the factors contributing to the event's success this year, said Judy Patterson, senior vice president and executive director at AGA.

"The response we got across the boards has been overwhelmingly positive," she said, noting that exhibitors and attendees appreciated the consolidated layout of the show at the Sands.

Patterson added she hopes to see similar positive numbers at G2E Asia in Macao in May 2013, where exhibit sales already are "considerably up compared to same month-to-month sales for 2012."

The buzz on the showfloor was cautiously optimistic about the return of the replacement cycle where gaming operators would start changing out older games with new products. Several companies introduced games featuring rock bands, popular movies and NASCAR drivers.

"We are seeing a transition into more personal and immersive experiences that rely on technology," said David Henry, marketing manager for 3M Touch Systems that brought multi-touch displays, among other offerings, to the show.

Henry said he was pleased with the traffic and commented that gaming is one of the bullish market segments for his company at the moment, thanks also in part to new states allowing gaming. "Everyone's still a little tight on the budget though," he added.

Attendee Morgan O'Bryant, director of a recruiting firm cFour Partners Worldwide, noticed that more of his clients were holding meetings at this show, compared with 2011.

"As a whole, it's just starting to pick up a little,” O’Bryant said. “Bally's last quarter numbers were tremendous. Konami had a good quarter. Everything is trending upward."

Global Sources 2012 Revenues Up 3%, Net Profits Up 9.3%
NASDAQ-listed Global Sources released its year-end 2012 results. Revenues in the year were US$232 million, up 3.0% over the previous year. Net profits in 2012 were US$32…
Sri Lanka Expo to Return in 2012
The Sri Lanka Expo 2012, organised by the Sri Lanka Export Development Board (EDB), is being revived after a 15 year hiatus. Scheduled to run from March 28-30 at the…
HospitalityStyleAsia2012, HospitalityTechnology2012 Collocate Again with Food&HotelAsia 2012
Food&HotelAsia, on tap April 17-20 at the Singapore Expo, will once again collocate with HospitalityStyleAsia2012 and HospitalityTechnology2012 to showcase a strong…
in-cosmetics Asia Bounces Back
Reed Exhibitions recently released the results of its delayed in-cosmetics Asia show. The exhibition was originally scheduled to be held in November in Bangkok, Thailand.…
Global Gaming Tries Its Luck with a New Time, Venue and Attitude
Although you might think that a trade show dedicated to gambling wouldn’t be a very optimistic place to be these days, participants at the Global Gaming Expo (G2E)…
7 Levels of Social Media for Trade Show Marketers
Perhaps you are an exhibit marketer who has yet to send your first Tweet, write your first blog post, or record your first YouTube video.  Or maybe social media has…