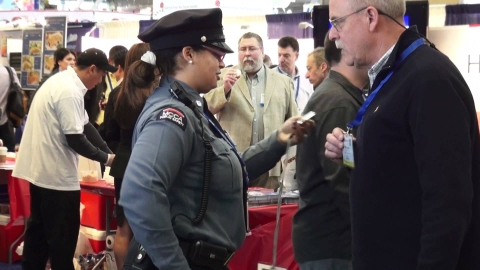 In the past few weeks alone, terrorist activities have wreaked havoc around the world at places ranging from an airport to a nightclub to an outside festival to even inside a church.

With the need for strengthened security for venues serving the trade show industry in mind, the International Association of Exhibitions and Events, along with the Exhibition Services & Contractors Association, have given their full support to provide industry guidelines and standards created by the industry, for the industry, to the Safety Act Office of the U.S. Department of Homeland Security.

The individual security efforts currently employed around the country have supported exhibitions and meetings for years, and the industry always has focused on improving safety and security preparedness for its events.

There now is a need for the industry to outline national standards that are in compliance with the Department of Homeland Security’s Safety Act Office, DuBois said.

This initiative will be facilitated by security consulting firm Keyway, which has assembled a strong team of career law enforcement officials.

“The reason we are coming together now is to enhance what is already in place and to be proactive, instead of reactive, in the new reality of the world we live in today,” DuBois said.

He added, “This initiative is unique and we are fully supporting it because a strategic alignment of industry guidelines with the federal government, specifically the Safety Act Office within the Department of Homeland Security, is needed to protect the industry in the event of a terror act.”

There are some security measures in place, according to Larry Arnaudet, executive director of ESCA, such as ESCA’s Worker Identification System (WIS) badge security system.

“There are many players in the culmination of an exhibition or event, and this initiative will need the support from the entire ecosystem,” he added.

In order to kick start the effort, DuBois said an ‘alphabet soup’ of industry associations recently met in Dallas for a meeting to start talking through how the effort would work in order to encompass the entire industry.

“It’s really a no-brainer to support this initiative,” he added.

Members of the exhibitions and meetings industry employ a variety of measures to provide safety and security to all event attendees.

With this initiative, these parties can align their best practices to establish a national standard for convention centers of all sizes as a united effort to further mitigate risks through safety, security and preparedness measures.

In the next 30 days or so, DuBois said there will be a lot of one-on-one meetings with not only other associations, but also venue management companies like SMG in order to gather industry input.

After that, the next step will be to work the Department of Homeland Security’s office to set the necessary guidelines, he added.

According to Kevin Olsen, founding partner of Keyway, “The current threat environment necessitates identifying industry best practices and developing a security standard for all venues that protects our human and economic resources, while providing the liability protections afforded by the federal government.”

The end result for a convention center that reached the top level of security measures implemented would not only mean a safer venue for attendees and exhibitors to be in, but also lower insurance premiums.

“We want to be proactive vs. reactive,” DuBois said of launching the effort. “We are pulling in all associations to assist on this.”

Exhibitions and Meetings Safety and Security Initiative Launches During IMEX America
In a room last week at IMEX America in Las Vegas, 135 people gathered to learn about the official launch of the Exhibitions and Meetings Safety and Security Initiative (EMSSI…
IMEX America Launches New CSR Initiative, Coincides with World Environment Day
Just before the United Nations’ World Environment Day 2016, which was June 5, the IMEX Group revealed a new volunteer CSR initiative that’s set to take place in Las Vegas the…
Meetings Mean Business Launches New Initiatives in 2017 to Prove Value of Industry
The Meetings Mean Business Coalition had a busy 2016 advocating to prove the value of the meetings industry, and 2017 looks to be even busier, as MMB continues to push…
Trade Show Leader: International Association of Exhibitions and Events’ David DuBois
As president and CEO of International Association of Exhibitions and Events, David  DuBois not only travels a lot, but also he is responsible for the management of 23…
IAEE Teams Up with VisitDallas for Women’s Leadership Initiatives and Forum
The International Association of Exhibitions and Events (IAEE) has formed a partnership agreement with VisitDallas for its Women’s Leadership Initiative and its annual forum…
Reed Exhibitions Announces Launch of New Security Show at ISC East
By Elizabeth Johnson Amongst packed aisles of security professionals testing new products and learning about trends at 2015 ISC East, Reed Exhibitions shared news that it’s…