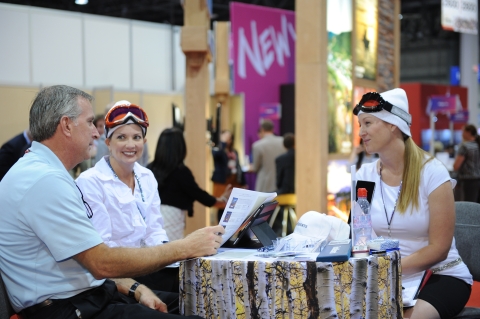 Sporting an orange suit, “Mr. Holland” splashed imaginary orange paint on attendees, while men in kilts showcased the magical powers of haggis and bagpipes during the Euro Party at IMEX America, a trade show and convention for meetings, travel, incentives and events that took place Oct. 15-17 at the Sands Convention Center in Las Vegas.

The show had much to celebrate. Compared with the inaugural event last year, the trade show floor was 28 percent larger and up to 120,000 net square feet.

More than 40 percent of the exhibitors increased their exhibit footprints, with the total number of exhibitors up to 2,413.

Attendance also saw a 20-percent increase and was up to 2,400 hosted buyers, as well as an additional 1,700 attendees.

Germany, Mexico and several European destinations continue to have a very strong presence on the floor.

For 2013, the show is projected to move to bigger halls at the Sands and also increase its buyer program.

"There's a really good buzz on the show floor," said Carina Bauer, CEO of IMEX Group. "It also shows the power of the U.S. market."

Much of the focus this year was on streamlining the appointment process for buyers and attendees. The online appointment system had been rebuilt to make it easier to use and the online exhibit directory also now had a scheduling capability.

The educational component also has been modified to keep attendees on the showfloor. In-depth sessions were scheduled for non-exhibit hours, including Smart Monday and time slots before 10 a.m. and after 4 p.m.

On the floor, attendees could get sparks of inspiration at Campfires, Lightning Learning Labs and presentations at the Inspiration Theater. Each session lasted between 20 and 40 minutes, offering insight from industry experts in an interactive, intimate setting.

Exhibitor Charlotte Weatherall, director of sales and marketing for The Balmoral Edinburg, appreciated the organizers efforts to drive the hosted buyer attendance, but was hoping to have a fuller schedule next year.

"The show feels quite busy and the caliber of buyers is good," she said. "We all marketed our properties quite heavily before we came, and each of us has on average about 10 appointments over three days. We'd like to see it up to six or seven a day."

She also noted that the Visit Scotland booth that her company was participating in had invested in a new booth and doubled the participating partners since the previous year.

Attendee Nancy Marsh, a hosted buyer with Tire Centers, could hardly find time for lunch. "I have eight appointments a day," she said. She also attended several presentations requested by her host, which turned out to be a great deal.

"There are a lot of different places that would work for our group that I wouldn't have thought of otherwise," Marsh said.

Last year, she discovered Punta Cana as a perfect destination for her group, and this year was hoping for similar success.

The next IMEX America will be held next October at the Sands Convention Center in Las Vegas.