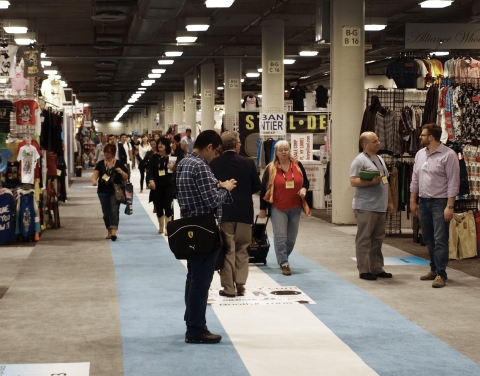 The first day of OFFPRICE, held Feb. 15-18 at the Sand Expo & Convention Center in Las Vegas, kicked off with crowds of buyers in the aisles, with some exhibitors calling it the busiest day they had ever had at the show that was celebrating its 40th run.

The showfloor spanned 132,000 net square feet, its largest one to date, and there were 8,8460 buyers, a 5.5-percent increase, compared with the same show in 2014, looking for products often priced at 70 percent below wholesale costs.

It was the largest percentage gain in retailer attendance in more than seven years, resulting in the highest attendance the show has ever had.

"More retailers than ever before have figured out how instrumental a visit to the OFFPRICE Show can be for their stores," said Stephen Krogulski, CEO of the OFFPRICE Show, which is owned by U.K.-based Tarsus Group.

He added, "The show has gotten a little bigger and better each year. It’s an influential marketplace for both buyers and wholesalers. The companies that exhibit here all source deals for a living. Retailers are guaranteed to find an incredible deal on some type of apparel."

One key to more buyers at the show this year was working with representatives such as Humberto Gonzalez, who was responsible for bringing a large contingent from Mexico and other countries.

“We were pulling in people all the way down to South America and over to Spain,” Gonzalez said.

A newer section of the show, Cash and Carry, was packed with people looking for deals on everything from jewelry to electronics to cashmere scarves.

Krogulski said it was the third show for that section with a record number of 69 booths, and he expected it to grown even more in the future.

“We are always looking for new categories to expand in,” he added.

Trends on the showfloor included women’s dresses, seamless tops and leggings, as well as polo shirts, dress shirts and cargo shorts for men.

“You come to OFFPRICE because you expect to find good deals and then you come back for the unexpected,” Krogulski said.

He added, “There was definitely an appetite for people who were willing to take some chances on new products and categories.”

Even though OFFPRICE has a high retention rate with its exhibitors every show, there was still a wide range of new products on the floor.

“We were able to exceed our expectations, and at the same time, met great new accounts that will hopefully be long lasting,” said Brandon Cooperman of D&L Apparel, Ltd.

Buyers also were impressed with the show.

"Las Vegas is a hub for beauty; beautiful faces, landscapes, buildings, and moments flash by at every point. However there is no greater concentration of it than within the 2015 OFFPRICE Show,” said Brandi Beckwith, buyer, Groovy Goods.

She added, "Endless aisle after aisle of diverse clothes with no shortage of vibrant colors and textures you simply must reach out to experience."