OFFPRICE Show Holds Its Own in Las Vegas 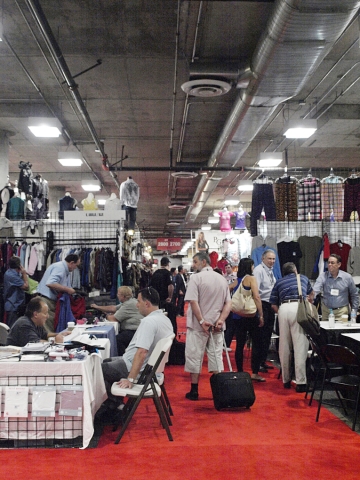 Dedicated to bargain apparel, accessories and footwear, OFFPRICE Show may have gained its momentum during the economic downtown, but it continues to have a strong presence even as things begin to turn around.

August attendance was also close to the 11,500 that attended the previous event, according to show officials.

The show has seen boon times during the recession, with both of its biannual editions being honored as fastest-growing shows at the upcoming TSNN Awards: Celebrating Trade Show Excellence Nov. 2-4 in Louisville, Ky.

Owned by U.K.-based Tarsus Group, OFFPRICE was part of the Las Vegas's biannual Fashion Week, which included events at several venues across town such as the Las Vegas Convention Center and Mandalay Bay Resort & Casino.

"We are getting a wider variety of customers across all product categories," said David Lapidos, executive vice president of OFFPRICE, noting that the show has become a reliable source for retailers to connect the top brands and move the excess goods.

He added, "Buyers go to other shows to see the latest fashions and they come here to write orders."

Lapidos said that he had to turn exhibitors away for the August show and that more than 70 percent of the showfloor already is sold for the February show that will be located on the second floor at the Sands Expo Center.

He added that he also anticipates a "dynamic increase" in the footwear segment at the next year's event.

Exhibitor Sam Sutton with Sutton Industries said he had a good show, but he still feels the lack of consumer confidence as buyers continue to be cautious and focus on stocking the basics and keeping inventories low.

"At the same time, people are looking for novelty, and that's a good sign,” he added.

Attendee Polly Stemwedel, a buyer for Lentz Department Store, said she usually focuses on comfortable and casual children's and women's apparel, but this time, part of her budget was allocated for jewelry and accessories.

To help her test out new product lines, she added that she wished that the purchasing minimums were smaller.

While cautiously optimistic about her business, Stemwedel said, "I am ready for things to start picking up."

OFFPRICE Show Holds Steady After a Record Event
Bargain apparel, accessories and footwear event, OFFPRICE Show, posted strong numbers Aug. 17-20 at the Sands Expo & Convention Center in Las Vegas. The show has seen…
Greenbuild Holds Its First Show Outside of U.S. in Toronto
The United States Green Building Council’s Greenbuild International Conference & Expo will be held for the first time outside of the U.S. in Toronto. The show,…
NAB Show Floors Largest Show in a Decade in Las Vegas
From the Cloud to net neutrality and the coolest cameras and software, the future of broadcasting and digital media was the focus of the National Association of Broadcasters…
Las Vegas Unveils "Vegas Interactive" at IMEX America
Las Vegas unveiled its trade show booth, Vegas Interactive, at IMEX America, which ran Oct. 18-20 at the Sands Expo & Convention Center in Las Vegas. The trade show…
LIGHTFAIR International Lights Up Las Vegas
Go to enough trade shows and you’ll notice that every event seems to have its own personality, flavor and attitude. Some shows are innovative and visually appealing,…
SHOT Show Sets Attendance Record at Sands in Las Vegas
The 37th SHOT (Shooting, Hunting, Outdoor, Trade) Show, owned and sponsored by the National Shooting Sports Foundation, saw a 6-percent jump in attendance this year, coming…