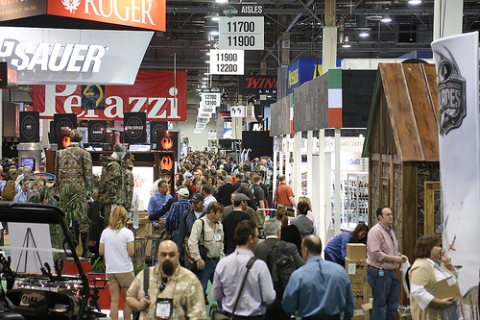 “The show has been a homerun on all accounts,” said Chris Dolnack, NSSF senior vice president and chief marketing officer. “In about six and a half months, our partners and we were able to deliver a show that in the eyes of customers is seamless. I won’t be surprises if this is our highest-rated show ever.”

NSSF terminated its contract with Reed Exhibitions in May 2013, after Reed’s decision to restrict the sale of certain types of firearms at an unrelated event. SHOT had been managed by Reed for three decades.  In July 2013, NSFF signed a contract with show management company ConvExx to oversee the show.

“Reed was very cooperative in the transition,” Dolnack said. The show already had a contract with Sands Expo Center.

He also noted that the next year’s show was already 90 percent sold out. “We don’t allow our biggest exhibitors to expand their footprint because that prohibits some of the smaller exhibitors from growing appropriately,” Dolnack added. “We do have a number of requests for larger booths next year but we’re running out of space.”

The show is staying at the Sands through 2018. “Our customers like Las Vegas in January,” Dolnack said, noting that currently there are no plans to expand into other venues in the city.

Even on the last day, the showfloor was busy. According to NSSF First-time Gun Buyer Report, the $6 billion industry has enjoyed robust sales during the last several years, fueled in part by “newcomers to the shooting sports who are female and more urban based.”

This category identified target shooting and personal and home protection as the top reasons for purchasing their first firearm, according to the report.

Exhibitor Renea Brown with Ed Brown Products didn’t mind their place at the back of the hall. “This has been a very good year for us,” she said. “For the firearms industry in general, just about any type of handguns are doing very well.”

She noted that the company, a custom manufacturer of 1911 handguns, has been growing during the past five years. “More people are learning how to shoot a gun for personal protection and for target shooting,” Brown added.

Firearms seller Travis Behrens with Fryes Piece Products has been coming to the show for five years. “For us, ammunition is the trending factor. Who’s got it. Who can supply it,” he said. He comes to the show to network with supplier and place orders for his small business. “The hardest thing right now is keeping product on the shelves,” Behrens said.