Produced by RX, the two-day show set the bar high with thousands of attendees and exhibitors, a wealth of business opportunities, pioneering sustainability initiatives, and innovative education and activations that celebrated the future of liquid culture.

"We were so excited to welcome everyone to the show's new home at Industry City,” said Jackie Williams, event director for Bar Convent Brooklyn. “As a result, we could offer more exhibitors for attendees, so they could have unique experiences and discover craft and independent brands, including exclusive first looks at expressions that haven't been released into the U.S. market yet." Bar Convent Brooklyn 2022 grew bigger than ever, with 163 exhibitors showcasing more than 50 new products and more than 3,800 attendees sampling more than 300,000 drinks and spirits. The show drew people from 55 countries and 42 U.S. states.

Committed to offsetting its footprint and boosting waste-reduction efforts, Bar Convent Brooklyn featured several new sustainable initiatives. Examples of how the show aimed to make an impactful change included a collaboration with Barr Hill Gin distillery and Trees for the Future that showcased planting efforts, as well as a composting program and recycling efforts though items such as water bottles made of recycled plastic.

Each year, Bar Convent Brooklyn works closely with its revolving education committee, consisting of diverse and unique voices of those who work directly in the industry, to curate sessions that will impact attendees, whether relevant to them as an individual or their careers or as a brand. This year's education program was led by Bar Convent Brooklyn’s new head of education, Lynnette Marrero, who is a beverage consultant, mixologist and co-founder of Speed Rack, the first all-female global cocktail competition that raises money to fight breast cancer. The education lineup featured 36 panel discussions, seminars and tasting demonstrations. 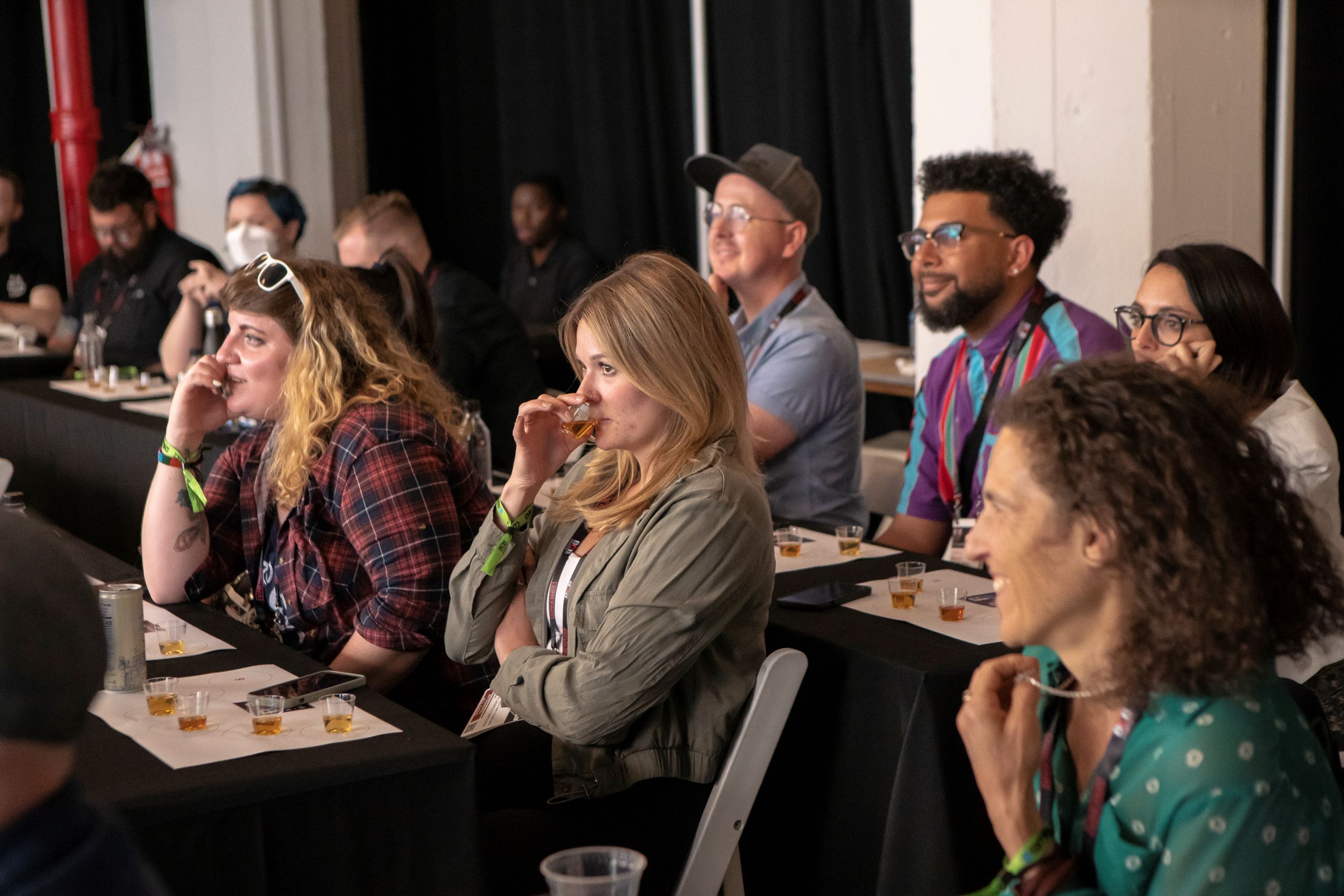 In addition, some prevalent industry trends and insights emerged during the two-day program. Transparency as a core theme was a thread through several sessions on topics such as sustainability in spirits distillation and operating venues, and how to create a modern business model. During their “Lost in Transformation” session, Briana Volk, Mika Ammunet and Andrew Volk spoke about the importance of being vocal about the why of your specific business model. It can not only add a level of respect within your community, but it also shows your patrons the reasons why prices rise, such as increased staff benefits, wages and equity, and how that leads to better service. Not only is transparency integral to customers, but it also applies to a company's staff and employees. Open feedback and communication, collective leadership and peer-to-peer training can result in employee retention due to shared respect and a sense of purpose.

Alex Francis explored another style of a business model during his “A Farm to Glass Model” session, showcasing how he helped spearhead the globally renowned cocktail bar, Little Red Door, as a farm-to-table model. Adopting a concept where all goods come from local suppliers boosts the local economy and fosters long, meaningful relationships that circle back to the table. While some cocktail menu ingredients will need to be sacrificed due to what's grown locally and seasonally, there are ways to make up those flavors using other ingredients and experimentation. Following this plan can help reduce carbon emissions.

In a new feature for this year’s show, Bar Convent Brooklyn and Chilled magazine teamed up for the inaugural Chilled 100 Spirits Awards show at the event, culminating after two days of judging by members of the bar industry. The results were announced at the Chilled 100 gala on the first night of Bar Convent Brooklyn, where 17 spirit brands earned the coveted Bartender Seal of Approval medal as standouts in their specific categories.

"We've been coming to Bar Convent Brooklyn since 2018, and this year reaffirmed that we'll definitely be back next year," said Tom Baker, co-founder of Mr. Black Spirits.

Don’t miss any event-related news: Sign up for our weekly e-newsletter HERE, listen to our latest podcast HERE and engage with us on Twitter, Facebook and LinkedIn!

2015 Music China Will Be the Biggest Yet
This year’s Music China, taking place Oct. 14-17 at the Shanghai New International Expo Centre in Shanghai, will be the biggest ever with 105,000 square meters of…
Reed’s Germany-based Bar and Beverage Show Heading to Brooklyn
Reed Exhibitions is bringing its Germany-based bar and beverage show to Brooklyn with the launch of Bar Convent Brooklyn, an extension of Bar Convent Berlin, which is…
Why It’s So Hard, Yet So Necessary, for Meeting Planners to Take Vacation
Last year, Cori Dossett, president of Conferences Designed based in Dallas, spent two weeks in New Zealand. It was meant to be a holiday, but despite being 7,500 miles from…
Consumer Electronics Show Expands its Massive Footprint, Yet Again
Despite the slight hiccup of a power blackout at the show, CES, the world’s largest consumer technology event, set a new size record this year with a 2.75 million net square…
NACV Show Will Expand Its Footprint and Offerings in 2019
The North American Commercial Vehicle Show (NACV Show), a biennial B2B trucking industry trade show designed for commercial vehicle fleet owners, managers and decision-makers…
Landing the World's Biggest Event with Face-to-Face Business Travel
This week, we found out who will host the world’s largest and most passion-inducing event, For the Events Industry, it re-emphasizes a vital truth about our work, one we…