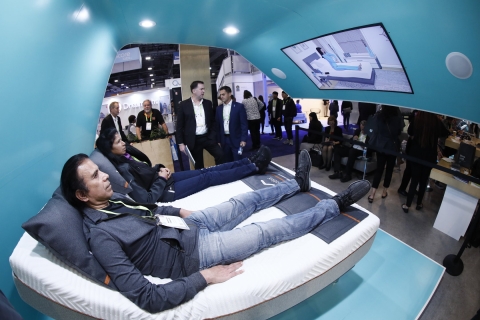 Due to space constraints, the show’s attendance likely won’t grow much more. The goal is to keep attendance capped at around 180,000, says Sarah Brown, senior manager of event communications with Consumer Technology Association, which produces CES. Last year’s show saw 182,198 domestic and international attendees; final numbers from 2019 are still being audited.

New to the showfloor this year was a section called Resilience, an area focused on technologies keeping the world powered, warm, fed and secure. It included 13 exhibitors. To help make the show more affordable for startup tech exhibitors, a section of the show floor called Eureka Park offered a lower-cost alternative to regular booth space.

The CTA also made a big commitment to diversity at CES this year: It will invest $10 million in venture firms and funds focused on women, people of color and other underrepresented startups and entrepreneurs.

He added, “At CTA, this is one more tool we are deploying to help promote diversity in the technology industry.”

CES kicked off in 1967 in New York City with 250 exhibitors and 17,500 attendees. It’s since grown by more than 10-fold and encompasses both traditional and non-traditional tech industries. It was at this show that companies have introduced innovations that made major impacts on history, from the VCR in 1970 to the CD player in 1981, HDTV in 1998 and tablets in 2010.

IPPE 2019 Will Boast Largest Trade Showfloor In Its History
The 2019 International Production & Processing Expo (IPPE) appears to already be breaking its own showfloor records eight months prior to the event.  The annual feed,…
Amusement Park, International Baking Shows Boast Largest Events in History
The International Association of Amusement Parks and Attractions’ 2016 IAAPA Attractions Expo, currently running in Orlando, and the 2016 International Baking Industry…
2017 NACS Show Boasts Record-Breaking Attendance and Showfloor
The NACS Show celebrated a record-breaking jump in attendance and size at its most recent event, held Oct. 17-20 at McCormick Place in Chicago. As the largest annual trade…
16th Edition of Labelexpo Americas Boasts Largest Show in Its History
The 16th edition of Tarsus Group’s biennial trade show, Labelexpo Americas, was the largest in its history. A total of 487 exhibitors were spread across the biggest…
Houston Boasts a Record-Breaking 2017 Convention Year
Hurricane Harvey may cause 2017 to go down in history as a tumultuous year for the City of Houston, but that didn’t stop the city from coming back strong while setting…
HITEC Houston Boasts Highest Attended Event in Its Association’s History
The Hospitality Industry Technology Exposition and Conference (HITEC) recently wrapped up its highest-attended North American event in its association’s 65-year history. The…