Creative Thinking and Digital Engagement Ruled the Day at EXHIBITORLive 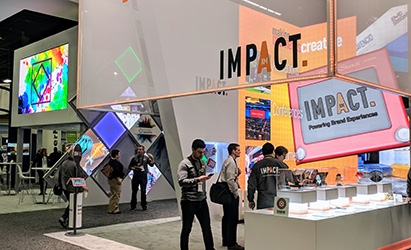 From Warhol-themed terrariums to frequent flyer cocktails, the EXHIBITORLive 2018 conference and trade show inspired event and trade show marketing professionals to think about their companies’ engagement strategies in new and unexpected ways.

The event got the creative juices flowing in the middle of the new Connection Zone, where attendees could “connect with their species” and think about new dimensions to their programs while coming up with a name for a giant, multi-faceted Pink Elephant.

On the showfloor, exhibits and event companies found new and exciting ways to blend tech and live experiences.

Before enjoying a glass of champagne, attendees at the Czarnowski exhibit had a chance to learn about the company’s capabilities on touchscreens placed on the exterior glass wall before taking a deeper dive through a virtual reality experience delivered in tower viewers.

“It’s a whimsical approach (that is also) informative,” said Nick Simonette, Czarnowski vice president of sales. “Not everyone wants to use headgear because it makes them feel off-balance and looks awkward (but) this is a familiar setting.”

Simonette commented that the digital engagement component is growing tremendously.

“It used to be available to a select few,” he said. “Now we’re finding ways to contextually put it in various spaces, and customers are deploying it through different channels.”

Expanding into digital engagement also was among the key themes for Live Marketing, an experiential marketing agency.

“Whether it’s apps, virtual reality, augmented reality, any time we develop a digital engagement, we also want to make sure that there’s a live component and that its properly activated,” said Dan Cox, Live Marketing creative director.

The company’s VIP Airport Lounge at the back of the exhibit hall had a line, even on the last day. Attendees received “boarding pass” invitations, were entered in a drawing for luggage and discussed their programs over an app and a Marketing Mule cocktail.

When asked about the most promising type of digital engagement, Cox said that his bet is on augmented reality.

“It makes it possible to engage several people at the same time and it fits our space well,” he said.

Augmented reality was the star at the Impact XM exhibit, where objects such as Rubik’s cube and Mr. Potato Head served as AR triggers as attendees made their way through the exhibit.

He added, “It’s a fun, interactive way to educate your audience and you can do it in a 10x10.”

Engaging tech but of a different kind drew attendees to the 3D Exhibits booth, where they could have their selfie engraved on a macaroon cookie before heading to an Ideation Calibration Workshop behind a closed garage door.

At the GES exhibit, attendees started their journey by going through a questionnaire that determined their creative personality type.

After they explored the Idea Gallery that showcased some of the company’s capabilities – from projection mapping to a virtual reality mission to Mars – participants got a chance to connect with their creative match on a physical level by building a “terrarium” with various types of materials in a lightbulb-shaped vase. A Warhol terrarium recipe, for example, included colored moss, desert plants and river rocks.

Commenting on the right blend of physical and tech, Detra Page, GES senior manager of corporate communications, said that clients are more interested in projection technology and augmented reality, among other applications, because technology offers new ways to show things.

“It’s something that intrigues people but they want to make sure they do it well,” Page said.

EXHIBITORLive will return Feb. 24-28 to the Mandalay Bay Convention Center.

Attendee Engagement Reaches New Heights on EXHIBITORLive! 2016 Showfloor
Walking the aisles of the EXHIBITORLive! 2016 showfloor at the Mandalay Bay Convention Center in Las Vegas last week can best be described as awe-inspiring, enlightening and…
Fresh Innovations in Attendee Engagement & Experiential Marketing Flourished at EXHIBITORLive 2017
Decked out with spring flowers, EXHIBITORLive 2017 offered a fresh take on attendee engagement and experiential marketing, blending ingenious design with seamless technology…
BPA Worldwide-Led Working Group Assists UFI in Creating Audit Rules for Digital Events
A working group organized by BPA Worldwide has come up with a solution for a pressing need that surfaced after one of the biggest pandemic pivots. An industry standard for…
Thinking Outside the Convention Center
I am excited to be both a media partner and keynote speaker for the Digimarcon Cruise this coming April.  I was asked to assist with running the conference as well, and…
The Problem of Linear Thinking
Your old road is rapidly agin'; please get out of the new one if you can't lend your hand for the times they are a-changin'. Bob Dylan, The Times Are A-Changin’ One of my…
Education Sessions Delivered at EXHIBITORLive! 2016
EXHIBITORLive! 2016 at the Mandalay Bay Convention Center in Las Vegas was all about educating and empowering the trade show and events industry.  With more than 80…