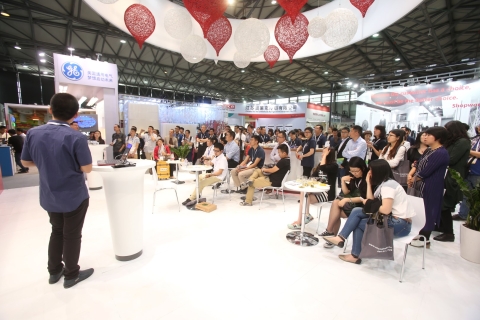 The first edition of C-star, Shanghai's International Trade Fair for Solutions and Trends all about Retail, featured 162 exhibitors from 23 countries, presenting the latest retail technologies and trends for the Chinese market on 53,800 square feet of net exhibit space.

With nearly 50 percent of the companies having overseas headquarters, C-star is the most international retail trade fair in Eastern China and emphasizes the show's significance to leading retailers from abroad.

As the official satellite show of EuroShop - the world's No. 1 retail trade fair – C-star 2015 was organized by Messe Düsseldorf (Shanghai) Co. Ltd. with the support of the EHI Retail Institute.

“I think it is not exaggerating to say that C-star has made a successful start and we are very confident that the show will further develop and become the leading retail show in China. This is only the start,” sais Axel Bartkus, general manager of Messe Düsseldorf (Shanghai) Co., Ltd.

“The number of shopping malls in China is set to double over the next years and Shanghai is the top retail spot in China, setting the benchmark for the country's retail business. It only makes sense that we came here to start C-star. We have brought our expertise from Düsseldorf to Shanghai and everyone believes in the potential and the future growth of C-star,” said Hans Werner Reinhard, managing director of Messe Düsseldorf GmbH and chairman of Messe Düsseldorf China Ltd.

Michael Gerling, CEO of the EHI Retail Institute, added: “China will soon become the world's largest retail market, so it was the right time and the right decision to start C-star now.”

C-star 2015 attracted many companies who have been exhibiting at EuroShop (held every 3 years in Düsseldorf, Germany) for many years.

“When C-star was launched at last year's EuroShop we were very excited to exhibit in China for the first time. We have been on board with C-star from the very beginning and we want to develop the show together with Messe Düsseldorf. You will definitely also see us next year at C-star,” said Mike Boeffert, managing director of Schlegel (Ningbo) Co., Ltd.

The C-star exhibitors were pleased with the high quality of the trade visitors. Wang Yue, director of Changhong Decorations, said, “It is very fascinating to see the never ending visitor flow in the hall. We also had many potential clients at our booth in the past days and are more than satisfied to be here at C-star.”

At the C-star Retail Conference, leading industry professionals came together for two days to discuss solutions for retailers to turn their physical stores into preferred shopping destinations again, despite rising e-commerce and online shopping.

The conference featured numerous keynote speakers from international and Chinese retailers such as METRO, Walmart and Yi-Hao-Dian.