How Hurricane Dorian Is Impacting Meetings and Trade Shows 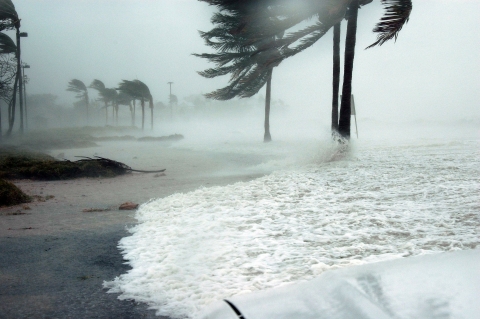 Hurricane Dorian whipped through Puerto Rico and the Virgin Islands yesterday, bringing heavy rains and high winds. As a Category 1 storm, it spared much of the main island of Puerto Rico from extensive damage, though islands off the eastern coast were hit harder.

Dorian will continue on its path heading toward the coast of Florida over the weekend through Tuesday. Forecasters are predicting it may grow into a Category 4 hurricane as it moves through warm waters.

With Labor Day weekend upon us, it’s a relatively slow time for meetings and conventions, CVBs report. While poor for business, this has worked out in the best interest of the safety of attendees.

A statement released by Discover Puerto Rico today included the following: “Travel planners with upcoming events in Puerto Rico can be confident that their plans will not be affected. Hotels, including those in Vieques and Culebra, are operational, and most businesses are planning to reopen today. Airports and cruise ports are open, and airlines and cruises have resumed, or are starting to resume normal routes.”

“Because this is a holiday weekend and we are a beach destination, there are not a lot of conferences and conventions typically scheduled for this weekend,” says Holcomb. “We will keep in touch with upcoming groups to be sure they have the most up to date information. We encourage everyone to watch the weather and contact their hotel directly for more information.”

Fort Lauderdale reports having eight groups in town currently, and so far, none have reported cancellations, according to Kara Franker, senior vice president of marketing and communications with Greater Fort Lauderdale CVB.

This weekend also happened to be a quiet one at Tampa Convention Center, according to Kevin Wiatrowsky, public relations with Visit Tampa Bay. “We have nothing on our calendar to be affected by the storm,” he says.

The same goes for Jacksonville, which reports having no large groups in town this weekend.

One meeting has been reported postponed to later this month along Florida’s Historic Coast, according to Barbara Golden, communications manager with St. Augustine, Ponte Vedra & The Beaches Visitors and Convention Bureau. “We are in full prep mode,” she says.

In Orlando, Rosen Hotels & Resorts is opening the doors of its eight Orlando-area properties with special distress rates starting at $60 per night for those displaced by Hurricane Dorian. The company is also working to help evacuees find a safe home away from home. Call 866-377-6736 for assistance.

TSNN will continue to update this story as more information becomes available.

More Conferences Canceled as Southeast Prepares for Hurricane Dorian
As Hurricane Dorian ambles its way toward the Southeastern United States, it’s wreaking more havoc on conferences and conventions. Show organizers are taking precautions to…
Shows Cancel in Wake of Hurricane Florence Impact on East Coast
Several shows have canceled at convention centers expected to be impacted by Hurricane Florence, which is projected to make landfall in the Carolinas as a Category 3 or 4…
How the Coronavirus Outbreak is Impacting the Chinese Trade Show Industry
More than 7,700 people have been sickened and 170 people have died from the coronavirus in mainland China, while at least 68 cases have been reported in other places around…
How Small Experiences Can Deliver Big Impact Within Your Trade Show
Small is the new big. When it comes to trade shows and conferences, purposefully smaller B2B events, delightful consumer-esque experiences and more curated thought leadership…
Social Media’s Impact on Convention and Trade Show Marketing
In the competitive meetings landscape, with a rise in smaller, more frequent events and continued emphasis for conventions and trade shows, planners are under immense…
Retail Parallel: Embracing Technology and Its Impact on Trade Shows
What doesn’t kill you makes you stronger. This is especially true when it comes to technology and the evolving landscape of omnichannel retail for brick-and-mortar retailers…