How to Lighten Up Your Conference with Laughter Yoga 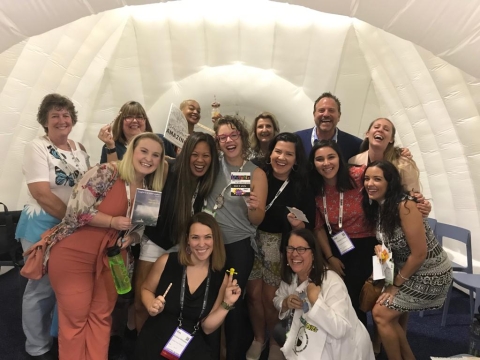 Following an insightful session on leadership at IMEX, I was surprised to see a woman in a white doctor’s coat enter the room. “Everyone, stand up!” she said. Oh, great, I thought to myself — is this going to be one of those awkward, “go introduce yourself to someone new” activities? It turned out to be something much more fun.

Sarah Routman, founder of the company Laugh Healthy and a self-proclaimed “laugh doctor,” proceeded to lead our group in a new-to-me kind of exercise: laughter yoga. We practiced forced laughter, pretended to toss an imaginary laughing emoji up in the air, focused on our breathing through laughter and ended up actually laughing, quite hysterically, from all the antics. I think everyone in the room felt lighter after our five minutes with Routman were up.

They say that laughter is contagious, but Routman teaches that it’s also good for your health. She’s been trained as a certified laughter yoga instructor (yes, that’s a real thing!), and has also trained in Reiki and reflexology. A former school teacher, Routman now travels the country hosting laughter yoga sessions at events for companies from Hyatt to Cigna to Best Buy.

Laughter yoga was coined by a doctor from India named Madan Kataria, aka “The Laughter Guru,” based on science that shows laughter is healthy. The body cannot differentiate between fake and real laughter, says Dr. Kataria, so you enjoy the same physiological and psychological benefits — such as a reduction in blood pressure, a drop in stress levels and a more positive outlook on life — from both kinds. “What soap is to the body, laughter is to the soul,” reads an old Yiddish proverb.

You can’t help but smile being in the presence of Routman for even a few minutes, even before she begins her techniques for sparking chuckles. Event planners can work with her to lead workshops ranging from three minutes (perfect to kick off or end an educational session, as she did at IMEX) to one hour, for groups as large as 1,000 people.

The best part about laughter yoga? It requires zero skill, equipment or workout clothing (meaning there are few reasons attendees could say no!). Routman has recently been featured at The National Wellness Conference, The Minnesota Hospice and Palliative Care Conference and The American Association of Orthopaedic Executives Conference.

If you’re curious about laughter yoga and how Routman leads sessions, sign up for her free laughter call that takes place at 9AM CST every Monday morning. Talk about a great way to start the week!

How to Get Your Boss on Board with Sustainable Events
When I was in my previous career in marketing and communications, I worked on a team that planned corporate events. My role was graphic design, so I didn’t usually offer…
How To Further Your Sustainability Goals With Virtual Events
It seems like every trade show and event is “pivoting” to virtual right now. For those live events that didn’t integrate a virtual component before COVID-19, it’s been a…
How to Tell If Your Audience Is Engaged
Two event organizers walk into a room and scan the audience. Upon leaving the room, the first event organizer says, “No one is engaged. They are all texting and reading…
How to Get (And Keep) People Engaged With Your Booth During a Trade Show
The day of a trade show can be hectic but it’s also when all of your pre-event efforts will pay off. The time you spent tracking and managing segmented guest lists will now…
How to Utilize the Data You’re Already Collecting on Your Sponsors
Sponsorship data has been a hot topic for years and continues to play an important role in the events and exhibitions industry. It’s clear that sponsorships are here to stay…
How to Get Your Sponsors to Pay for Your Event App
Quite often event organizers struggle with tight budgets and see getting an event app as a luxury they cannot afford. “This year we can’t make it, our budget has been…