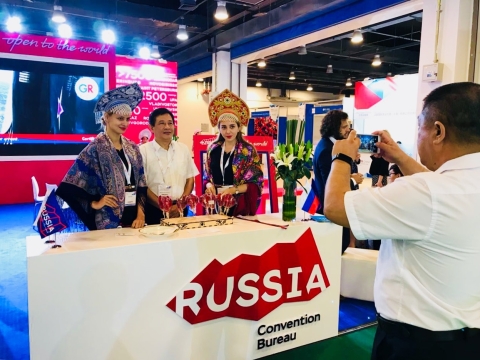 IBTM World, taking place in Barcelona Nov. 19-21, has revealed that representation from China at this year’s show has increased by a staggering 450 percent in net space. compared with last year, in addition to strong sales from across the whole of the Asia Pacific region.

As a consequence, there will be two China pavilions at the event this year. The first pavilion will feature 10 exhibitors from the Zhejiang Province all new to IBTM World.

The second pavilion will include exhibitors from Zheijiang’s Capital city Hangzhou as well as representation from the city of Xiamen and China Star, one of China’s leading DMCs and PCO.

IBTM World has seen further major increases in net space this year from across the rest of the Asia Pacific region (an overall increase of 18 percent, compared with 2018), including Malaysia (+19 percent), Singapore (+16 percent), Macao (+10 percent) and the Philippines (+8 percent).

Galaxy Entertainment Group (GEG), Macau’s leading integrated resort, hospitality and entertainment group, is taking a stand at the event for the first time this year.

At IBTM China in August 2019, GEG officially introduced Galaxy International Convention Center (GICC) and Galaxy Arena, which will open in the first half of 2021.

Creatively designed for bespoke meetings, incentives, conferences and exhibitions, GICC is the latest addition to Galaxy Entertainment Group’s ever-expanding integrated resort precinct in Macau, which will set a new standard for Macau, while supporting the city’s vision of becoming a ‘World Center of Tourism and Leisure’.

Singapore Tourism Board is further increasing its presence at IBTM World with more partners and a larger representation from the Mandarin Orchard, the Raffles Hotel and SingEx, one of the main venue management and consultancy companies in Singapore. The Singapore stand will this year make a splash with tasty food created by some of the city-state’s Michelin chefs and cocktails from its top mixologists.

In addition, new exhibitors from Tokyo will attend the show independently for the first time, to promote the city ahead of the 2020 Summer Olympics. The Kyoto Convention & Visitors Bureau will also be returning.

David Thompson, Event Director, IBTM World, said: “The expanded presence from China and Asia Pacific at IBTM World this year will provide fantastic added value for our Hosted Buyers, opening up exciting new regions that they may not have considered before. The increasing number of Chinese and Asia Pacific exhibitors at IBTM World is a natural result of the success of our IBTM China event, as well as the introduction of the newest event to our portfolio, IBTM Asia Pacific, and the relationships that we have forged there, and continue to develop with our local teams. We look forward to welcoming all our new and returning exhibitors to our flagship IBTM World, which is set to be an action-packed and inspiring three days.”

As well as a full diary of targeted business meetings, attendees to this year’s event can also look forward to a varied programme of exciting networking events and an inspirational knowledge programme.

The event is expected to welcome over 2,800 exhibitors from over 150 countries, as well as over 3,500 buyers and thousands of visitors. At IBTM World 2018, over 77,650 pre-scheduled business meetings took place over the three-day event. For more information please see https://www.ibtmworld.com/buyers/

UFI Report Projects Growth for Trade Shows in 2021
A new report from UFI, the Global Association of the Exhibition Industry, predicts that a comeback is in the offing for trade shows. Having polled 457 companies in 64…
Event Preview: IBTM World Already Setting Records for First-Time Exhibitors
The organizers of IBTM World are feeling pretty good going into next week’s event, set to take place Nov. 19-21 in Barcelona. This year, the event has double the number of…
Growth of Chinese Sports Market Boosts ISPO Shanghai
A total of 526 exhibitors and 655 brands presented the summer sports trends of the coming season at ISPO Shanghai from July 5-7. More than 14,500 trade visitors, four…
2019 CEIR Index Report Shows Strong Growth in Government, Food Sectors
Last week, Center for Exhibition Industry Research released its 2019 CEIR Index Report, which analyzes the 2018 exhibition industry and provides a three-year economic outlook…
Center for Exhibition Industry Research Index Report: 2Q Shows 1 Percent Overall Trade Show Industry Growth
The trade show industry grew by 1 percent in the second quarter of 2014, marking the sixteenth quarter of consecutive growth, according to the CEIR Index Report released…
CEIR Reports 1 Percent Q3 Uptick in Overall Trade Show Industry Growth
Despite uncertainty on where U.S. trade negotiations stand with China, coupled with an unstable stock market and the global economy slowing down overall, the latest Center…