Indiana and Orange County Convention Centers Get Ready to Grow 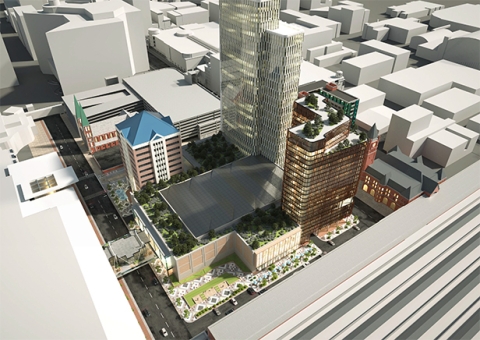 As cities across the U.S. continue to make significant investments in major expansions and upgrades to their convention centers in order to better compete for group business, two more facilities are joining the flurry of construction projects.

Last week, the city of Indianapolis announced plans to expand the Indiana Convention Center and build two new hotel towers that will add more than 1,400 connected hotel rooms to the city’s room inventory.

The ICC’s new 50,000 square foot ballroom will be the largest in the state, while the additional hotel towers will increase the city’s number of rooms connected by enclosed skywalks from 4,700 to more than 6,100 and its hotel properties from 12 to 14.

“The combination of what will be the state’s largest ballroom and two additional hotel towers connected by enclosed skywalk will transform our ability to secure major new events that have never been held in Indy,” said Leonard Hoops, president and CEO of Visit Indy.

He added, “It also gives us the capacity to better host multiple citywide conventions at the same time and help us retain nearly $300 million in annual convention and event business.”

The project was green-lighted after the Capital Improvement Board of Managers (CIB), a municipal corporation of Marion County responsible for financing and managing capital improvements, unanimously approved a recommendation from a bid review team to move forward with negotiations with local developer Kite Realty Group Trust to expand the convention center on the site of downtown Indy’s Pan Am Plaza.

This expansion will be the Indiana Convention Center’s sixth since opening in 1972.

While the facility currently offers three ballrooms totaling about 61,000 sq. ft. of function space, since 2010, Visit Indy has been unable to bid on more than 200 conventions and events interested in meeting in the city due to hotel room inventory and/or ballroom space requirements, according to Hoops.

This expansion will allow the CVB to re-engage these groups, which collectively could generate up to $1.1 billion in future economic impact for the region and state, he added.

While an existing commercial office building will remain on the site, Kite also proposed adding two new hotels on the property – a 38-story tower with a reflective glass exterior that will include multiple levels of retail and a rooftop bar offering the only high-rise view from the southwest side of downtown, and a second tower that would anchor the opposite corner of the block, across from Union Station on the west side of Illinois Street.

The new hotels are expected to be Hilton-affiliated brands that will be linked to the ICC by a climate-controlled connector across Capitol Avenue, according to Visit Indy officials. The recommendation comes after two years of research that included customer focus groups and surveys, a convention center and hotel demand analysis commissioned by Visit Indy and a 10-month bid process to more than 40 developers.

“We received three extremely competitive proposals that all satisfied the requirements of the RFI,” said Melina Kennedy, CIB Board president.

She continued, “The proposal selected best activates the south side of the Indiana Convention Center given its high-profile location and direct connection across Capitol Avenue. We believe both of these components are crucial to our continued success as a convention and events destination.”

Estimated at $120 million, the budget for the expansion includes public infrastructure improvements and the construction of the new publicly-owned facility and connector.

“While we are still early in the process of discussing the operational impact of this exciting proposal with local and state leadership, the city believes this capital expenses for this project could be funded by the property tax increment generated from the new development site and the re-allocation of some portion of the existing Downtown TIF funds already dedicated for the CIB on an annual basis,” explained Thomas Cook, chief of staff for Indianapolis Mayor Joe Hogsett.

Although the project timeline has not been finalized, the CIB will begin working with the city and Kite to obtain all the necessary agreements and legislative approvals sometime next year.

Following the completion of that process, construction is expected to take about three years.

Meanwhile, the Orange County Convention Center is moving forward with its planned North-South Building Improvements project after a budget was approved last week.

Earlier this year, the Orange County Board of County Commissioners approved Orlando Mayor Teresa Jacobs’ proposed budget of a $605 million Capital Improvement Plan that will fund the construction of two projects designed to improve and enhance the facility’s North-South Building, including:

“We spent the last two years talking with clients and evaluating our own campus to find the best projects that will help us maintain our spot as the No. 1 meeting destination in the country,” explained Jessie Allen, interim executive director for the OCCC.

He continued, “Securing the funding will enable us to ramp up for an exciting time of development and growth at the Center of Hospitality.”

A timeline for construction on the project has yet to be announced.