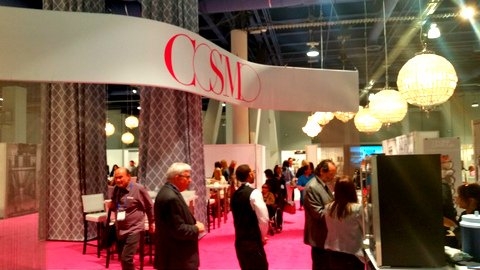 During one week in February in venues spread throughout Las Vegas, there are no less than 17 individual fashion shows going on at the same time.

Making sure each show is memorable as a standalone event is key and often accomplished through creating a unique experience that leaves in an indelible impression.

Waling the aisles at Reed Exhibitions’ The Agenda Show, held at the Venetian/Sands and serves the surf, skate and street community, an attendee instantly knows that are not at your typical show.

Music is thumping, the aisles are packed with interesting booths and products, skateboarders are flying by and the attendee is transported into the urban street culture world, and that’s the point, according to the show’s founder Aaron Levant.

“We really want the show to look like a cool showfloor experience”, Levant said, adding that the main goal is to make it feel like a retail store where someone could find all the hottest products in an engaging place.

For that reason, booths are not set up by priority points, but grouped instead with “like-minded brands”, Levant said.

Two other shows, Capsule, which also is owned by Reed, and Liberty, which is owned independently, both had identities of their own, with DJs spinning tunes, food trucks, unique showfloor layouts and grand entranceways.

Next door at the Business Journals, Inc. shows – AccessoriestheShow, stitch and MRKET – all of which are combined with the Reed shows to form Modern Assembly – there also were distinctive features to set each of the three shows apart.

Walking into MRKET, a menswear show,  one of the first things an attendee sees is Vanguard’s Gallery, a section of the show at which exhibitors are handpicked by Michael Mako, who previously worked at Saks Fifth Avenue.

“The younger brands that are taking a classic look and putting a contemporary twist on it are located in the gallery," said Sharon Enright, BJI’s executive vice president of the trade show division.

In the middle of the gallery is a seating area with modern, comfortable furniture and four products, “Mako’s Picks”, that were placed in scenes around a winter theme.

Over at stitch, ready-to-wear for women, the floors look like an attendee is walking into a high-end showroom, complete with chandeliers hanging up and down the aisles.

Britton Jones, president and CEO of BJI, said of all three shows, “It’s all about creating a similar experience as to when somebody visits a store.” For that reason, no exhibitor is guaranteed the same booth for every show. “Just like a store always changes things around,” he added.

In order to create all of the unique looks at the BJI shows, the company has an in-house design team that “understands the showfloor process,” Jones added.

The MAGIC Market Week portfolio of shows, which were recently bought by UBM and are held at the Mandalay Bay Convention Center and Las Vegas Convention Center, have an even bigger challenge to tackle with 10 shows to create different experiences in.

“Each show needs to have its own voice,” said Christopher Griffin, president WWDMAGIC & SOURCING  at MAGIC . “It should reflect the community it serves. All 10 shows’ personalities are quite distinct. We’re not trying to create a homogenous experience.”

Right in the middle of PROJECT Vegas was a beautiful green space created in the center aisle with interesting furniture and greenery. It was an instant respite from walking the aisles that were filled with either hard-walled showroom-style booths with big-name brands like Levi’s, Fossil and True Religion or smaller booths  in the outer aisles.

The whole showfloor buzzed with excitement on opening day and for exhibitors such as Yaniv Britton, it was the place to be. “We’ve been at this show for seven years, and it’s where we do most of our West Coast business,” she said.

Next door in the THE TENTS, it looked exactly like it sounds. The area was transformed into a huge tent with white, flowing draped fabrics on the ceiling and a light feel all the way throughout that really captured the essence of the higher-end products displayed.

At the POOLTRADESHOW, there were artists working on their latest creations, a tattoo parlor just in case anyone was interested in some new ink and at the Sock It To Me booth, someone could grab a free pair of socks if they just tried them on.

“Honestly, people are shocked they get a free pair of socks if all they have to do is take a photo with them on and tag us on Instagram,” said Matt Bergman.

Over at the LVCC, where the majority of the MAGIC shows were located, FN PLATFORM, for the shoe market, was divided up in a clever way so that people would know what area they were in at all times with not only signage, but also gathering places themed around the type of shoes featured.

There were product areas such as Cosmo, where a lounge with chandeliers, a bar and bright pink carpeting marked the section of the showfloor catering to women’s shoes.

Other areas included Zen, In Play and Camp, to name a few.

The six other shows at the LVCC included a new one – Playground – that focused on children’s brands.

“This show has a very distinctive voice,” Griffin said. He added like the other shows, that now all take up big pieces of real state at the convention center, he expected Playground to stake its own claim in the MAGIC fashion show portfolio.

IMEX America Focuses on Going Green at October Event in Las Vegas
Attendees and exhibitors to this year’s IMEX America, on tap Oct. 13-15 at the Sands Expo & Convention Center in Las Vegas, will experience a show that’s even greener…
How to Create a Dynamic Trade Show Experience
If you're going to spend the money to get space for your company at a trade show - not to mention paying for people to man the booth or losing valuable employees who could be…
OFFPRICE Show to Unveil EVOLVE Premium Section During Las Vegas Fashion Week
Value fashion buyers looking to add premium products to their store shelves will be excited about the new elevated price point segment debuting at the upcoming OFFPRICE Show…
“Ask Joes” Enhance Attendee Experience at AAPEX 2015 in Las Vegas
At last year’s AAPEX, a show for the aftermarket auto parts industry that is held in November at the Sands Expo in Las Vegas, decided to up their attendee engagement game by…
Las Vegas Convention and Visitors Authority Unveils Virtual Reality Experience
The Las Vegas Convention and Visitors Authority (LVCVA) launched a Virtual Reality Companion app that helps transport trade show delegates and would-be visitors alike to…
InfoComm 2020 to Debut the Live Events Experience, Expand Presence In Las Vegas
InfoComm 2020, the largest professional audiovisual expo and conference in North America, is gearing up to introduce the Live Events Experience (LEX), a new showfloor feature…