Maker Faire Chicago Set to Launch in the Windy City 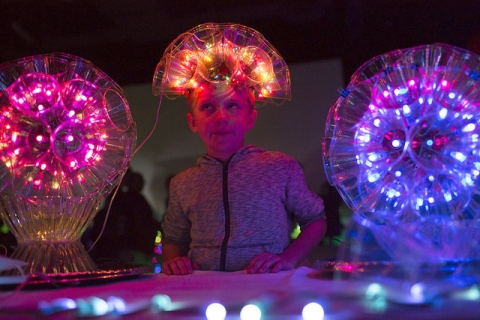 Make: and Reed Exhibitions are partnering up to launch Maker Faire Chicago 2017. Set for April 22-23 at McCormick Place, the two-day, family-friendly event will be collocated with the Chicago Comic and Entertainment Expo (C2E2).

Upon its debut, Maker Faire Chicago will take its place as the third flagship Maker Faire, alongside the New York City and the San Francisco Bay Area Faires.

Approximately 20,000-25,000 attendees and 300-400 “Makers” (i.e., exhibitors) are expected to converge from around the Midwest and beyond for the inaugural Chicago Faire, according to show officials.

“We have known that Chicago supports a growing maker community and we have wanted to organize Maker Faire Chicago to reflect the extent and diversity of making in Chicago,” said Dale Dougherty, founder and CEO of Maker Media, which co-founded Maker Faire in 2006.

He added, “We are excited to partner with Reed Exhibitions to bring Maker Faire to Chicago at McCormick Place, co-located with C2E2.”

From DIY experts to complete beginners, Maker Faire attendees of all ages can expect plenty of creative inspiration and opportunities to find something to learn about, build or make.

As creative, hands-on events for makers of all ages, ranging from DIY experts to complete beginners, Maker Faire Chicago attendees can look forward to finding something fun and inspiring to learn about, build or make.

She added, “Make: is a respected brand and a leader in the Maker Movement, and we believe that this launch will open up many opportunities for the future growth of both events, continuing to bring a one-of-a-kind event weekend to the city of Chicago.”

In 2016, Maker Faire celebrated 192 Faires in 38 countries across the globe, including Tokyo, Rome, Oslo, Berlin, Paris and Singapore, and in U.S. cities including Atlanta, Detroit, Kansas City, Orlando, Pittsburgh and San Diego.

ProFood Tech Show Set to Launch in 2017 at Chicago’s McCormick Place
Three different entities have teamed up to launch ProFood Tech, a new event that will focus on processing technologies serving the food and beverage industry. ProFood Tech…
Reed Exhibitions’ in-cosmetics Set to Launch in New York City in 2016
Reed Exhibitions is bringing its in-cosmetics brand to the Big Apple next year when it launches the show Sept. 7-8 at Pier 36. in-cosmetics North America, which focuses on…
New Converters Expo Set to Launch in Charlotte, NC
In response to industry demand, Converters Expo will be launching a sister trade show in Charlotte, NC. Set to debut Feb. 6 at the Charlotte Convention Center, Converters…
First-ever “Global Exhibitions Day” Set to Launch June 8
The first-ever “Global Exhibitions Day” - a global initiative that unites exhibition organizers, venues, associations and service providers from countries all around the…
HANNOVER MESSE USA Set to Debut in Chicago at IMTS 2018
Deutsche Messe is gearing up to stage its first-ever HANNOVER MESSE in the U.S. market next year with HANNOVER MESSE USA, debuting Sept. 10-15 alongside IMTS 2018 at…
AHC Media Set to Launch Emergency Medicine Reports’ Summit
AHC Media, a medical media and publishing company, will launch the Emergency Medicine Reports’ Summit, an interactive seminar highlighting the key issues emergency medicine…