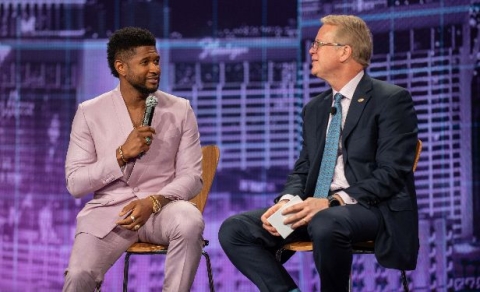 More than 1,200 event professionals gathered at MPI’s World Education Congress at CAESARS FORUM last week, the largest in-person industry event so far this year. While attendance was about half of pre-pandemic levels, the large showing is another shot in the arm for an industry recovering from essentially a lost year of business.

A hybrid event, WEC placed an emphasis on safety in bringing together 1,229 people in Las Vegas and attracted another 568 remote attendees. Content reflected the state of the industry, pointing toward ways to hold events responsibly while confronting social issues that reinforce the need for greater diversity and inclusion. Among the highlights of the three-day event were a question and answer session between MPI President and CEO Paul Van Deventer and music star Usher, and a panel featuring women executives leading prominent organizations.

Timing worked out well for the event, which occurred two weeks after Nevada lifted all COVID-19 restrictions. While MPI maintained what it referred to as “duty-of-care” procedures, it was able to set a number of firsts:

Vaccinated attendees were not required to wear masks, and the bulk of the audience identified themselves as ready to forgo social distancing, and acted accordingly.

“This show has been well received by everyone — it’s truly a love fest,” reported Destination DC President and CEO Elliott Feguson on a LinkedIn post, noting this was his first industry show since January 2020. “When people question if in-person events will return, this has been evidence of the importance of convening live. Nothing compares.”

MPI was among the few industry organizations, along with Connect, to host an in-person event in 2020. About 700 attended WEC in Grapevine. Meanwhile, PCMA Convening Leaders adopted a hub-and-spoke hybrid model that was primarily virtual and IMEX was forced to cancel its annual Spring European event. IMEX is moving ahead with its Las Vegas show in November. Connect, which hosted 750 event professionals at a collocated event with BizBash May 24-26 at Red Rock Casino Casino Resort & Spa, is aiming for more than 3,000 Aug. 30-Sept. 1 in Tampa, Florida.

Yet with the seeming return to normal, WEC took on a greater purpose. It occurred as statistics bear out that business travel is not coming back as quickly as hoped (evidenced by MPI’s smaller attendance). Industry shows bringing together trade show organizers and meeting planners with destination representatives and venue operators will be important in spurring new events that should help fill many of the still vacant hospitality industry jobs and further resuscitating the U.S. and global economy.

Angie Ahrens, senior manager of global events at Infor, said she could feel the difference being among her peers again. “Connecting with friends and meeting new colleagues was my priority in coming to Las Vegas,” said Ahrens. “I value hybrid yet it was incredible to be with everyone.”

MPI will mark its 50th anniversary at next year’s WEC, to be held in San Francisco, June 21-23.

MPI Selects Atlantic City for 2016 World Education Congress
Meeting Professionals International (MPI) has selected Atlantic City, N.J., as the destination for its 2016 World Education Congress (WEC). The conference will be held …
MPI Unveils Unique Networking Opportunities for World Education Congress in Atlantic City
Meeting Professionals International and host city partners Meet AC and Caesars Entertainment have unveiled several unique and exciting networking opportunities at this year’s…
Georgia World Congress Center Space Used to Educate, Entertain Local Community
Even though the Georgia World Congress Center is one of the country’s largest convention center venues with 1.3-plus million square feet of exhibit space, the building is…
MPI’s World Education Congress Heads to Grapevine, Texas in 2020
Meeting Professionals International (MPI) has selected Grapevine, Texas, as the destination for its World Education Congress (WEC) in 2020. The association will collaborate…
Landing the World's Biggest Event with Face-to-Face Business Travel
This week, we found out who will host the world’s largest and most passion-inducing event, For the Events Industry, it re-emphasizes a vital truth about our work, one we…
Survey Points to Importance of Face-to-face Meetings for Government Agencies
Meetings Mean Business, a coalition formed in 2009 to spread the word about the value that business meetings, travel and events bring to the U.S. economy, recently conducted…