NPE Wraps Up Its Largest Show in History 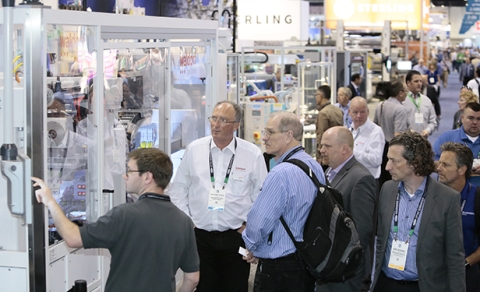 The triennial trade show and conference, which took place May 7-11 at the Orange County Convention Center in Orlando, attracted approximately 65,000 attendees and more than 2,180 exhibiting companies covering more than 1.2 million square feet of exhibit space.

In addition, more than 11,000 international attendees from 110 countries participated in the event.

With the theme of “We’ve got it covered,”NPE2018 drew in thousands of plastic industry professionals for five days of learning, networking and technological discovery, while showcasing emerging technologies and innovations that are shaping the future of plastics.

According to NPE officials, while the show exceeding expectations in metrics, strategic additions helped the event feel bigger and better than ever.

“We worked diligently to continue the tradition of innovation that NPE is known for with features like our 80,000 square foot Bottle Zone and our expanded education programming,” explained Susan Krys, PLASTICS vice president of trade shows and marketing, during the event.

She continued, “Over the past five days, we’ve been on the ground and hearing directly from the many members and attendees who we’ve worked with tirelessly to put on a show of this magnitude. Attendees have been really impressed with NPE this year.”

As attendees walked the show halls lined with large TV screens, they had a chance to view interviews on NPE Network with plastics professionals who make plastics safer, better and stronger, while the Show Daily included recaps of the machines, product launches and expansion announcements coming out of the show each day.

The event also included a local component through NPE’s new student day program, which engages high school students who might not otherwise have considered careers in plastics.

More than 125 students from Orange County Public Schools came to NPE to participate in the inaugural program that included a morning briefing with plastics industry executives followed by a tour of the NPE showfloor, according to show officials

On and off the trade show floor, there were new programming additions to attract broader end-market attendees.

New and expanded elements at NPE included 12 technology zones – five of which were new – and nine education programs, including a 3D Printing Workshop and an Agricultural Plastics Recycling Conference, as well as the collocation of the new PLASTICS-produced Re|focus Sustainability & Recycling Summit and the Plastics Leadership Summit – educational events for sustainability and C-suite executives, respectively.

He continued, “We’ve created the Plastics Leadership Summit and co-located the annual Re|focus Sustainability & Recycling Summit to bolster on-site learning. We also announced a 100 percent waste diversion goal to further our industry’s commitment to the environment.”

16th Edition of Labelexpo Americas Boasts Largest Show in Its History
The 16th edition of Tarsus Group’s biennial trade show, Labelexpo Americas, was the largest in its history. A total of 487 exhibitors were spread across the biggest…
IPPE 2019 Will Boast Largest Trade Showfloor In Its History
The 2019 International Production & Processing Expo (IPPE) appears to already be breaking its own showfloor records eight months prior to the event.  The annual feed,…
SuperZoo Wraps Largest Show to Date at Mandalay in Las Vegas
SuperZoo, a pet retail trade exposition and conference produced by World Pet Association, recently wrapped its largest show to date at the Mandalay Bay in Las Vegas, with a…
Amusement Park, International Baking Shows Boast Largest Events in History
The International Association of Amusement Parks and Attractions’ 2016 IAAPA Attractions Expo, currently running in Orlando, and the 2016 International Baking Industry…
2017 International Roofing Expo Scores Largest Show in 62-year History
Positive vibes, robust attendance and a bustling, sold-out trade show floor added up to a record-breaking year for the International Roofing Expo, held March 1-3 at the…
HITEC Houston Boasts Highest Attended Event in Its Association’s History
The Hospitality Industry Technology Exposition and Conference (HITEC) recently wrapped up its highest-attended North American event in its association’s 65-year history. The…