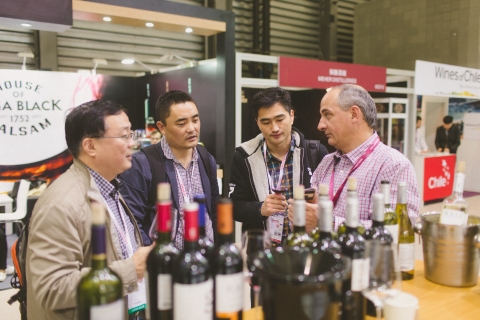 The recent staging of ProWine China 2015, International Trade Fair for Wines and Spirits, in Shanghai drew around 600 wine and spirits producers from 33 countries presented their products.

The event featured 16 country pavilions and three regional pavilions. The majority of the exhibitors was from France, followed by Italy, Spain and Argentina and included many large wine producers such as KWV, Les Grands Chais de France, Constellation Brands and LCW.

Popular wine growing nations such as Australia and Chile exhibited with an official national pavilion for the first time. ProWine China is the regional satellite event of ProWein, the leading international trade fair for wines and spirits, held annually in Düsseldorf, Germany.

Attendees included high-class importers, distributors, wine and spirits merchants as well as food and beverage managers, with most of them coming from outside of Shanghai.

Michael Degen, executive director of Messe Düsseldorf and director of ProWein, said he was very pleased with this development: “Last year we had talks with our exhibitors about whether they want to come back or not. This year the question is not if they return but how much space is available. This confirms that we are on the right track with our satellite event ProWein in China!”

“Results from this year’s show clearly demonstrate the quality difference with visitors between ProWine China and all other shows in China. Exhibitors reported meetings with only serious buyers, not people wasting their time,” said Brendan Jennings, General Manager, China International Exhibitions.

Exhibitors also gave the show high marks. “We decided to go to ProWine this year and we will definitely be coming back because I think that this show attracts good quality visitors and it is also a very comfortable trade fair. Everyone we have spoken to has talked about real deals. After working here for over a decade, I have found new niche partners as well as partners wanting to work within our existing distribution network,” explained Matt Bahne, GM Sales for Greater China at De Bortoli Wines.

The ProWine China exhibits were supported by a top notch ancillary program, including the “ProWine China Education Campaign” with wine seminars, workshops and discussion forums. Many of the events were organized by the Wine and Spirit Education Trust (WSET).

In addition Lu Yang, Wine Director at the Shangri-La Group, and Simon Zhou, CEO of Ruby Red, discussed topics such as “The specifics of the Chinese wine consumer market” at the second ProWine China Industry Summit. In addition, countries such as Austria, Germany and Hungary held seminars to promote their wine growing regions.

The next ProWine China will be held from Nov. 7-9 at the SNIEC exhibition center in Shanghai. In the same year, Messe Düsseldorf has two other wine and spirits trade fairs scheduled in other parts of the world: ProWein 2016 (March 13–15) in Düsseldorf, Germany with more than 6,000 exhibitors from some 50 countries and the premiere staging of ProWine Asia 2016 (April 12–15) in Singapore.