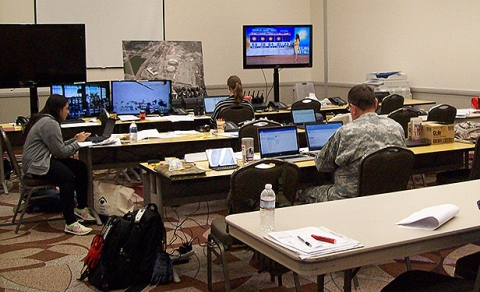 Smart City Networks has been playing a different kind of role in Houston this past week.

Instead of supporting the technology and data needs of trade shows at the convention facilities it serves, the company has been working overtime to help Hurricane Harvey survivors stay in touch with their loved ones and other resources at several emergency shelters throughout Texas, including the George R. Brown Convention Center and NRG Park in Houston.

“Smart City began in Houston more than 30 years ago,” explained Mark Haley, president of Smart City Networks. “It was a top priority for us to keep emergency response teams and those affected connected when it matters the most.”

On Sept. 5, the telecommunications provider hosted Federal Communications Commission Chairman Ajit Pai at both Houston facilities to review the communications infrastructure and provide a behind-the-scenes look at how these systems are supporting those in the community who need them most.

“We had a productive meeting with Chairman Pai to give the FCC a thorough update on not only our efforts at our Houston facilities to support the local community, but also in how we design networks that work reliably for both trade shows and unexpected events like Harvey,” Haley said.

He continued, “The network that we installed at the GRB in 2016 in advance of the Super Bowl and the amount of bandwidth on hand is more than capable enough to handle the peak number of survivors in the shelter at the GRB, approximately 10,000-12,000 people. We continue to make Free WiFi available to all survivors still housed at the GRB and NRG Park, along with any ancillary services (and) will do so as long as the shelters are in place.”

Telecommunication infrastructures at the GRB and NRG Park include automated redundancy and safeguards that have been built into the networks to ensure reliability in natural disasters such as hurricanes.

Smart City also opened up WiFi throughout both facilities and deployed hardline telephones, wired internet drops and power drops for people to keep their cell phones and other devices charged, as required by City of Houston officials and the Red Cross.

In addition to the two shelters in Houston, the company also played an essential role in telecommunication efforts at shelters opened in the Ft. Worth Convention Center and the Kay Bailey Hutchison Convention Center in Dallas, providing WiFi throughout both venues along with hardline phones, internet drops and VLAN connections for emergency responders and the Red Cross.

But with its home base in Central Florida, how does Smart City plan to respond to Hurricane Irma and the soon-to-be impacted communities there?

“We have a great deal of experience in emergency preparedness from our operations at the Orange County Convention Center over the past 15 years, as well as our sister company, Smart City Telecom (SCT), which is the local ISP in Orlando and also provides telecommunications for Disney World,” Haley explained.

He added, “SCT has worked with Disney over the past 20 years in handling major hurricanes and storms in Central Florida and together have developed a detailed Emergency Preparation Program that is currently in place for Hurricane Irma.”

At this time, Smart City is monitoring the oncoming storm and waiting to see if any of its Florida convention center clients will be declared shelters.

“The Miami Beach and Tampa Convention Centers are both closed for the storm and our understanding is that they will not be used as shelters,” Haley said.

He continued, “All events in Orlando have been canceled as well and we are awaiting further direction on how the venue will be utilized for any support efforts. If they are, our team will be ready to jump into action to provide the same services we provided in Houston. In the meantime, our priority is making sure our local team members and their families are safe as the storm passes through.”

With operations in more than 35 convention venues across the U.S., Smart City considers itself a vital part of each of those communities, and when those facilities and communities are impacted, the company feels a responsibility to respond, Haley added.

“As things settle out in Houston, there will be numerous opportunities for other trade show-related companies to support recovery efforts of both the venues, to get shows and events rolling and people working, as well as efforts to help local people rebuild their houses, such as the PCMA Harvey Relief Fund,” he said.

Houston Hospitality Leaders Unite to Help Industry Workers Impacted by Hurricane Harvey
A month after Hurricane Harvey made landfall in Texas as a category 4 hurricane, many coastal communities in the Lone Star State now are in the process of picking up the…
Smart City Networks Adopts SIP Trunking Nationwide
Smart City Networks, a provider of technology and telecommunications services for the convention industry, has embarked upon a process to convert phone lines at 39 convention…
Smart City Networks Helps Convention Centers Meet Client Demand for Wireless Connectivity
Once viewed as a luxury, high-speed wireless connectivity without restrictions is now an expectation of business professionals, particularly at hotels, conference and…
Houston First and KHOU Partner to Launch City’s First Network Satellite Studio
Houston First Corporation and CBS-affiliated television station, KHOU 11, have formed a partnership to deliver the first network satellite studio in downtown Houston. The…
Smart City Networks Provides Extensive Tech Upgrades at Miami Beach Convention Center
Convention industry telecommunications services provider, Smart City Networks, has finalized a contract with the Miami Beach Convention Center to provide extensive technology…
IAEE, Smart City Networks and Caesars Entertainment Make a Positive Impact in Local and International Communities
This article is the second in a series that we will be running throughout the holiday season shining a bright, well-deserved spotlight on companies that are #GivingBack. The…