Trade Show Companies Give Back to Their Communities 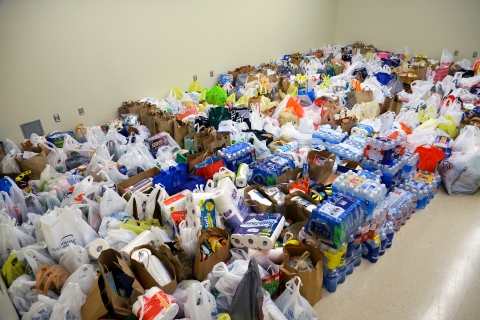 The trade show industry has a history of being generous to its surrounding communities, and a few companies recently have lent a helping hand to those in need.

SmartSource Computer & Audio Visual Rentals, based in Hauppauge, N.Y., continues to be a strong supporter of Long Island Cares, the nonprofit organization based in the same town and founded by the late Harry Chapin, which brings together resources to benefit the hungry on Long Island and meet other vital humanitarian needs.

SmartSource, which has a longstanding tradition of raising funds and volunteerism on behalf of Long Island Cares, recently made yet another contribution.

Approximately 35 staff members from the company’s Hauppauge headquarters raised $1,000 for Long Island Cares, which was matched by SmartSource for a total contribution of $2,000.

Last year, a team of SmartSource employees headed to the Long Island Cares warehouse to volunteer in its Warehouse Sorting & Repacking Program.

On its 30th anniversary, SmartSource made a sizeable contribution to the organization in honor of its founder, Julian Sandler, for whom fighting hunger was a top priority.

Helen Brett Enterprises, producers of the New Orleans Gift and Jewelry Show, designated their August show as a collection point for donations to South Louisiana residents, who were affected by catastrophic flooding.

HBE provided donors with a voucher for a free guest badge, as a ‘thank you’ for donating. Attendees donated 12,140 pounds of non-perishable food items, personal toiletries, cleaning supplies and bottled water.

Freeman volunteered their services to load the items into two trucks and transport them to Second Harvest Food Bank of New Orleans and Acadiana, where the items were transported to their distribution channels in the affected areas.

He added, “We started off with the idea of doing a small part in helping an area that has supported us for so many years and we are completely inspired by the generosity of our loyal customers, the New Orleans Ernest N. Morial Convention Center staff, Freeman and the onsite team from Helen Brett Enterprises.  Our thoughts and prayers are with those in need right now.”

CONEXPO-CON/AGG & IFPE Make Giving Back Part of Their Culture
The trade show industry is no stranger to teaming up with charities and demonstrating its commitment to social responsibility, and one recent Las Vegas-based trade show went…
Professional Convention Management Association Gives Back to Chicago Community
The Professional Convention Management Association not only brought thousands of convention managers to Chicago for a few days of networking and education last week during…
Corporate Social Responsibility: Do Companies Have a Responsibility to Their Communities?
More than ever, employees and customers want to work for and with a company with a strong social conscience. Developing a social conscience for your company not only impacts…
People News: Trade Show Companies Add to Their Ranks
Fall is a busy time in more ways than one in the trade show industry and several companies recently added to their ranks. The Louisville Convention and Visitors Bureau…
BOSTON STRONG: Running to Give Back
By Douglas Emslie, Tarsus Group Managing Director I strongly believe that we as an industry need to do more to give back to our communities. To practice what I preach, this…
And Now, for Some Good News! 5 Event Companies Giving Back Right Now
While it’s important for all of us to stay informed about the current health crisis and its impact on our industry, TSNN believes it’s important to balance out the negative…