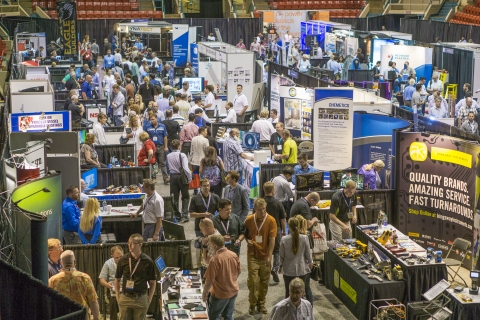 Culled from show management and data supplied to TSNN, the list represents the top 50 trade shows held last year ranked by net square footage in Canada. The full list can be found at: http://www.tsnn.com/toplists-cdn.

The show, held last year in June, also drew 852 exhibiting forms, 5,368 exhibiting personnel and 39,736 attendees, as saw increases across the board, compared with the year before.

“We have built a reputation at our show as ‘the only place to see it all’. Our attendance figures prove that we are succeeding in attracting high quality exhibitors and buyers," said Shirley Janeczko, show manager.

"dmg::events is honoured to have one of our flagship properties, the Global Petroleum Show, rank as one of the top trade show events in Canada." said Aaron Wilson, the show's senior marketing manager.

He added, "We are proud to be the meeting place for the oil and gas industry with this annual event."

Toronto dominated as the city with the most shows on the 2014 TSNN Top 50 Canadian Trade Show, with 25.

He added, “Event planners, exhibitors and sponsors are all focused on venues and a host city that maximizes both their business objectives and the experience and environment for their attendees and guests.  The continued growth in number and scope of the events we successfully host speaks volumes about the Toronto region and our record of success.”

Montreal had six and Edmonton and Vancouver had four.

The busiest month on the calendar for the largest shows in Canada was January, with eight, followed by May, with six.

The slowest months of the year were February, June and October, with two shows each.

The full the 2014 TSNN Top 50 Canadian Trade Show list of rankings can be found at: http://www.tsnn.com/toplists-cdn.