6 Convention Center Updates and Expansions to Watch In 2020

Upping their games to attract more meeting and convention business in an ever-more-competitive market, major U.S. convention centers are busy with renovation and expansion projects. Here’s what to watch for.

The 1.4 million-square-foot, $1.5 billion Las Vegas Convention Center District expansion and remodeling project is moving along on schedule. Last fall, the convention center announced it had completed more than 60 percent of the project’s Phase Two expansion, which broke ground in January 2017 and began construction in fall of 2018.

Phase One of the project, which included the Diamond Lot, the LVCCD’s new 26-acre parking and outdoor exhibition space, was completed in January 2017.

Expected to be completed in December 2020, the facility’s latest expansion includes a new 600,000-sq.-ft. West Hall that will be the largest column-free exhibit space in North America, according to the Las Vegas Convention and Visitors Authority.

Meanwhile, Phase Three, the complete renovation of the existing 3.2 million-sq. ft. convention center, will begin in summer 2021 and is expected to be completed by 2024.

The multi-year project’s phased approach was established to ensure that no business would be displaced during the construction and renovation of the 60-year-old facility, according to LVCVA officials.

Javits Center Expansion to Be Nearly Complete Next March The $1.5 billion expansion of New York City’s Javits Center is expected to be substantially complete by March 2021 and is moving toward an on-time, on-budget completion. The project’s steel and concrete superstructure is fully installed, and all concrete and steelwork is expected to be finished by March 2020, according to Javits officials.

Started in March 2017, the massive project will add 1.2 million square feet of event-related space to the Manhattan-based facility, including:

In addition, all of the new exhibit and meeting spaces will boast the latest technology in lighting fixtures, heating and cooling systems, and wireless connectivity, according to Javits officials.

Upon completion, the project is expected to be certified LEED Silver by the U.S Green Building Council.

The $126 million expansion of the Charlotte Convention Center is underway. In December 2019, the City of Charlotte, the Charlotte Regional Visitors Authority, hospitality leaders and members of the community officially kicked off the project with a groundbreaking ceremony. Upon completion in late summer 2021, the expansion will grow the 550,000-sq.-ft. facility’s existing meeting level by 50,000 square feet and will include:

The supplementary meeting room space will allow the center to house 55 individual breakout sessions at one time, with capacities ranging from 50 to 600 people theater-style per breakout, and the flexibility to create a 10,000 sq. ft. space. 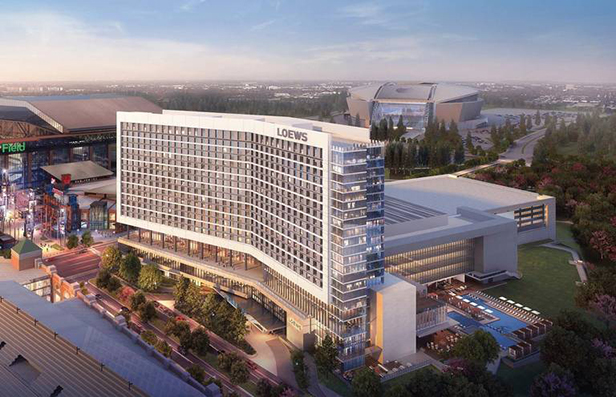 The city of Arlington, Texas, will soon be getting a new hotel and convention center. Approved by the Arlington City Council last December, the $550 million project will include a new 888-room Loews Arlington, a publicly owned convention center and a 1,500-vehicle parking facility.

Construction is expected to begin in early 2020 and be completed in 2023.

Memphis Convention Center Getting a Facelift

The City of Memphis is reimagining and reconfiguring the Memphis Cook Convention Center with a $200 million renovation that includes enhancements to the building’s interior and exterior. Started in December 2018 and slated to be complete by fall 2020, the three-level Renasant Convention Center’s refreshed spaces will include: According to Memphis Travel officials, every square inch of the facility will be touched by this project, including meeting spaces embracing river and skyline views, new outdoor terraces, glass-enclosed concourses, pre-function space and 46 breakout meeting rooms.

Oklahoma City’s new MAPS 3 Convention Center is moving along toward a scheduled opening in late 2020 or early 2021. Begun in June 2018, the $288 million facility will include:

According to Visit OKC officials, the facility’s angular façade will feature towering glass walls to make maximum use of natural light, outdoor landscaping using native plants and trees with a focus on sustainability, comfort and beauty, as well as a central plaza and other outdoor spaces.

Directly adjacent to the new convention center will be a new 605-room Omni Convention Center headquarter hotel, set to open in 2021.