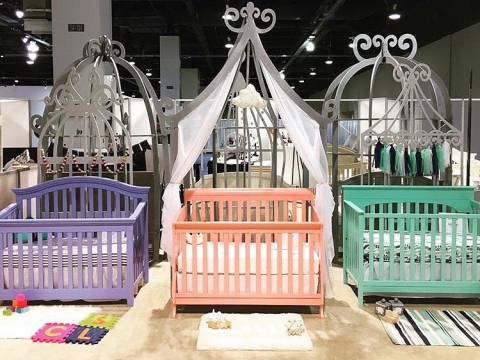 ABC Kids Expo, organized by All Baby & Child Corporation, welcomed more than 12,000 attendees and 900-plus exhibitors to its 1 million square foot showfloor Oct. 18-21 at the Las Vegas Convention Center.

Virtually every significant manufacturer and distributor of products for infants and small children, as well as many startups by parents, showed off their products, ranging from furniture and strollers to smudge-free chalk, timers for milk bottles and a sandwich cutter that turns pb&j into minions.

“We had to expand the new product showcase to accommodate the record number of entries this year,” said John Garcia, media relations for ABC Kids Expo.

The show is becoming more international. This year it set a new record with international attendance from 75 countries and also welcomed two new pavilions – Turkey and South Korea. Garcia is expecting to see an influx of buyers from China thanks to the country’s new two-baby policy.

All Baby & Child Corporation has been working hard to put their show on the map with that buyer category by having a presence at Children Baby Maternity Industry Expo (CBME) in Shanghai, China and in Singapore.

Back in the US, buyers could get inspiration at the 2th Annual Celebrity Nursery Exhibit designed by gear expert Vanessa Antonelli and inspired by Janet Jackson and Blake Lively. Future presidents could get a feel for the digs at the White House inspired playroom.

The show is always a showcase of “aha!” parenting products that you wonder how you lived without. One such example was a BabyDam by a British company by the same name. It seals off a smaller space of a bathtub, making it easier and cheaper to bathe a baby. Launching in the US in January, it already was getting lots of interest from retailers, according to exhibitor John Piner. He said: “It’s so simple and so effective you’d think there’d be something on the market, but there wasn’t.”

It’s exciting to see companies that once were small startup exhibitors do well, in part, thanks to the show.  Bobbie Rhoads, founder of Funbites, launched her sandwich cutter here four years ago. Since then, her product has been ranked among top ten presented on reality show Shark Tank and she has scored licensing deals for Minions and Paw Patrol characters. “It all started with a guy from Disney just walking by here at the ABC Kids Expo,” she said.

SEMA Show Attracts 140,000-plus Attendees to Las Vegas Convention Center
By Stephanie Selesnick The SEMA Show, organized by the Specialty Equipment Market Association, filled the Las Vegas Convention Center last week from Nov. 4-7. It attracted…
MINExpo INTERNATIONAL 2016 Welcomes Attendees from 130 Countries to Las Vegas
By Elizabeth Johnson This week, the world’s largest mining equipment, products and services exhibition was held at the Las Vegas Convention Center. Sponsored by the National…
TRANSACT Scores Big Attendee Numbers in Las Vegas
By Elizabeth Johnson After several years working with other host cities, TRANSACT, powered by the Electronic Transaction Association (ETA), returned to Las Vegas for the…
Licensing International Expo Unveils Matchmaking, Sports-themed Attendee Engagement in Las Vegas
Wonder Woman, with its feature film coming out next year, led the parade of characters and other licensable properties at the 36th annual Licensing International Expo that…
IAEE’s Expo! Expo! Attracts 2,300-plus Attendees in New Orleans
The International Association of Exhibitions and Events’ Expo! Expo! Annual Meeting & Exhibition attracted more than 2,300 attendees representing 26 countries (pending…
“Ask Joes” Enhance Attendee Experience at AAPEX 2015 in Las Vegas
At last year’s AAPEX, a show for the aftermarket auto parts industry that is held in November at the Sands Expo in Las Vegas, decided to up their attendee engagement game by…