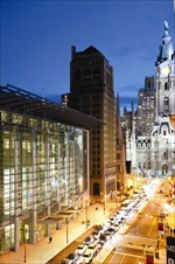 Less than a day after members of Local Eight of the United Brotherhood of Carpenters and Joiners of America, who work at the Pennsylvania Convention Center in Philadelphia, went on strike and threatened a 10,000-attendee medical meeting set to come into the center, the crisis was averted.

Union officials for all six unions that work in the building and the Pennsylvania Convention Center Authority, which oversees it, signed one year collective bargaining agreement extensions.

“I am very optimistic about the dialogue between the center, SMG, and the Labor Unions that emerged during these negotiations,” said Greg Fox, chair of the PCCA’s board of directors.

He added, “I believe we all share the same goal of working cooperatively together to deliver our customers the best possible experience and make the center successful.”

At immediate risk when the Carpenters Union decided to strike, along with the Teamsters, who refused to cross picket lines, was the American Association of Diabetes Educators annual meeting on tap Aug. 7-10 at the Pennsylvania CC.

“This agreement enables us to save the American Association of Diabetes Educators convention, which will have an estimated $22 million economic impact for our region,” Fox said.

Even before the strike was resolved, Charles Macfarlane, CEO of AADE, was optimistic the meeting would not be impacted.

McFarlane told TSNN before the new union contracts were settled, "As negotiations are ongoing, we anticipate that this will be resolved in a timely manner and not conflict with what we know will be a successful AADE Annual Meeting & Exhibition.”

The AADE event expects 10,000 attendees for the four-day event.

Besides the carpenters and Teamsters, the four other unions represented in the building are electricians, riggers, laborers and stagehands.

According to the PCCA, they had offered a competitive wage increase, but the point of contention with the Carpenters Union that led to the strike was the proposed “Exhibitor Bill of Rights”, which among other things, would allow exhibitors to perform more of their own work.

“Our contract negotiators offered a generous 10-year proposal that provided an annual 3 percent pay increase for our labor force, while making the changes to exhibitor rights that were necessary to increase the number of convention and other bookings at the center,” Fox said when the strike occurred.

Since the Pennsylvania CC opened its $780 million expansion in 2011, officials there have been working with the unions to make the building more cost effective for existing shows, as well as new business.

In June of this year, the PCCA board of directors selected SMG to privately manage and operate the Pennsylvania Convention Center.

“I am very optimistic about the dialogue between the center, SMG, and the Labor Unions that emerged during these negotiations,” Fox said.  “I believe we all share the same goal of working cooperatively together to deliver our customers the best possible experience and make the center successful.”

In order to work toward the goal, a standing committee made up of each union’s principal has been established to work together “to ensure the center accomplishes transparency and provides an excellent experience for its customers,” he added.