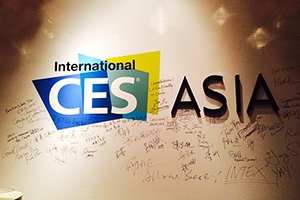 The Consumer Electronics Association has unveiled that Rupert Stadler, chairman of the board of management at AUDI AG, will deliver a preshow keynote address at the 2015 International CES Asia.

The inaugural event will run May 25-27 in Shanghai, China, at the Shanghai New International Expo Center (SNIEC) and will draw global businesses to showcase the latest products and technologies entering the Asian marketplace.

CEA is co-organizing the event with Intex Shanghai Co., Ltd., a producer of international tradeshows in China.

“Under Rupert Stadler’s leadership, Audi has become an automotive leader in the global marketplace, combining sleek and powerful engineering with cutting-edge innovation to create a luxury driving experience featuring the latest and greatest technology features,” said Gary Shapiro, president and CEO of CEA.

He added, “We are thrilled to welcome Rupert Stadler to the CES Asia keynote stage. Attendees at CES Asia will experience the latest innovation that shapes the future and showcase the breadth of our industry. Rupert Stadler is the perfect leader to kick off this dynamic event.”

Rupert Stadler joined AUDI AG in 1990, where he assumed various controlling tasks in the Sales and Marketing area.

Stadler switched to Volkswagen-AUDI España, S.A., Barcelona, as Commercial Director in 1994, where he was responsible for Controllership, Accounts, Personnel and Organization. From 1997 Stadler was Head of the Board of Management's Office for the Volkswagen Group, and additionally Head of Group Product Planning from January 2002.

From major global brands to startups, the entire consumer technology ecosystem will be on display at CES Asia, which will span 8,500 net square meters of exhibit space in its first year.

Major trends and product categories, including 3D printing, robotics, sensors, the Internet of Things and wearables, will be prominently featured across the show floor and in the conference program. Companies committed to exhibit space include Audi, Ford, Hisense, IBM and Monster.

200+ Exhibitors Join Inaugural CES Asia in Shanghai
The sold-out inaugural edition of CES Asia drew more than 200 exhibitors from 16 countries and regions to the Shanghai New International Exhibition Centre (SNIEC). The three-…
Inaugural International CES Asia Attracts More Than 4,500 Consumer Technology Professionals
More than 4,500 consumer technology professionals from 80 countries have registered for the inaugural International CES Asia™ since the launch of registration three…
2015 International CES Will Feature Head of Mercedes-Benz Dr. Dieter Zetsche as Keynote
The Consumer Electronics Association has tapped Dr. Dieter Zetsche, chairman of the board of management of Daimler AG and Head of Mercedes-Benz Cars, to deliver a 2015…
Consumer Technology Association Unveils Intel’s Kirk Skaugen will Keynote CES Asia 2016
The Consumer Technology Association, formerly the Consumer Electronics Association (CEA), has revealed Kirk Skaugen, senior vice president and general manager of the Client…
Inaugural Bevtec Asia Draws 150+ Exhibitors
Jointly organised by Messe Düsseldorf Asia and Asian Exhibition Services (AES), the inaugural edition of Bevtec Asia attracted more than 150 exhibiting companies from 24…
Inaugural Seatrade Cruise Asia in Busan Postponed
The inaugural edition of Seatrade Cruise Asia has been postponed to a later date as a result of the MERS virus outbreak in Korea according to the organiser and UBM subsidiary…