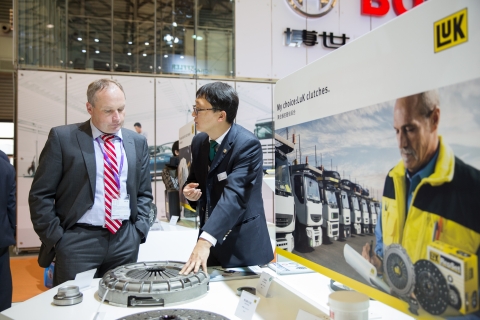 Automechanika Shanghai 2014, Asia’s largest trade show for automotive parts, accessories, equipment and services, will have a record number of exhibitors this week at the Shanghai New International Expo Centre.

The total number of exhibitors stands at 4,906, a six percent increase on last year’s show, with 39 countries and regions represented.

Of the 39 countries and regions being represented at the show, 17 will have overseas pavilions with brand new ones from Argentina and Pakistan this year. The returning pavilions are from France, Germany, India, Italy, Japan, Korea, Malaysia, Poland, Singapore, Spain, Taiwan, Thailand, Turkey, the UK and the USA.


Alongside exhibitor numbers, exhibition space has also increased this year to 220,000 square meters – a five percent uptick – reaching the capacity of the fairground. This consists of the 17 established halls as well as ten temporary halls.

A further breakdown of exhibitor figures by square meters reveals that the three main industry sectors covering the whole industry chain have increased for the 2014 show, compared to last year.

Repair & Maintenance has had the next largest increase (7.3 percent), which is partly attributed to a high level of returning exhibitors following a successful show in 2013.

Commenting on the record number of exhibitors and increased exhibition space, Jason Cao, senior general manager, Messe Frankfurt, said: “It is a pleasure to see Automechanika Shanghai go from strength to strength every year. This year not only have we achieved our highest ever number of exhibitors, exhibition space has also increased to a record level.  Seeing this encouraging result of Automechanika Shanghai is an excellent indication of its growing importance throughout China and across the globe as being an one-stop platform for the automotive sector.”

The expected number of local and international visitors eclipses last year’s figure with more than 86,000 expected.

Boosting the number are visitor groups from all over the world, including two new groups from Nepal and Vietnam, as well as returning ones from Australia, Germany, Greece, Hong Kong, India, Indonesia, Iran, Japan, Korea, Malaysia,  Poland, and Turkey.

From China, domestic visitor groups have increased to almost 50 from across the North, West, middle and South of the country, with particularly strong representation from Hebei, Henan, Hubei, Sichuan, Tianjin and Guangdong.

Automechanika Shanghai is organised by Messe Frankfurt (Shanghai) Co Ltd and the China National Automotive Industry International Corporation (CNAICO). It is one of 14 Automechanika fairs held in Africa, Asia, Europe and Central and South America.

Discussing the show’s future development, Ji Xuecheng also announced that due to the continued growth of the show, next year’s Automechanika Shanghai will take place at the larger venue of National Exhibition and Convention Center in Hongqiao, Puxi to provide the extra space needed.