Leaving a destination better than one found it isn’t just a theme that’s been resonating with many events lately – it’s been inspiring some convention and visitors bureaus to do their part, too.

Case in point is the Barcelona Convention Bureau (BCB), which teamed up with 13 of its partners for a Volunteer Day consisting of a full-day park clean up at Bryce Canyon National Park in Utah prior to IMEX America, held last October in Las Vegas.

With corporate social responsibility (CSR) initiatives a top priority for BCB and its partners, the activity was created to showcase BCB’s CSR initiative to U.S. incentive and corporate meeting planners, according to Chiara Peretti, account executive with Development Counsellors International.

“BCB wanted to find a creative way to showcase Barcelona’s actions towards Sustainable Tourism and thus, carried out this CSR activity in the U.S. prior to IMEX America, as this is the show that brings the majority of BCB partners to the U.S. during the same time,” Peretti explained.

She continued, “This was the first time BCB carried out an activity like this prior to a major North American show and based on its success, the BCB intends to continue this initiative moving forward.” 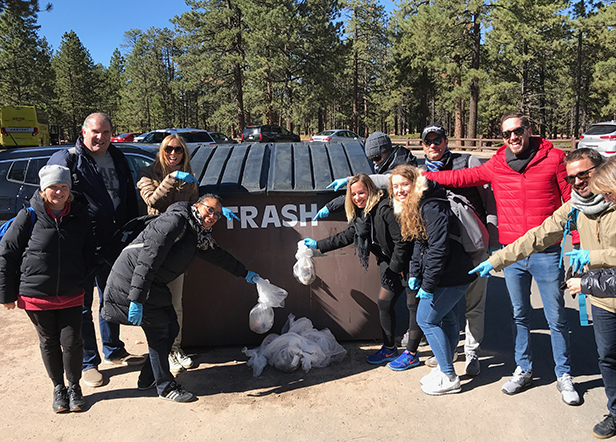 Cecile Dorian, BCB international promotion manager, came up with the idea to conduct a volunteer program pre-IMEX America and since Las Vegas is close to some of the country’s most beautiful National Parks, decided to incorporate the CSR activity with nature.

Bryce Canyon fit the bill, as it correlated perfectly with BCB’s “The Green of Barcelona” sustainable program, Peretti added.

“Cecile sent out the invite for the activity to all their partners attending IMEX America and as this activity reflected many of the partner’s efforts towards CSR in Barcelona, it was not difficult to enlist volunteers – plus, Bryce Canyon National Park is quite a popular location to visit in Utah!” Peretti said.

She continued, “All the participants thoroughly enjoyed their day at Bryce National Canyon and not only did they have the opportunity to see this beautiful park first-hand, but they also participated in giving back to the community by helping to keep the park clean for all future visitors. It was well worth the 4.5-hour drive from Las Vegas each way.”

Under the umbrella of Turisme de Barcelona, a consortium set up by Barcelona Municipal Council, the BCB has also developed a program dedicated to sustainability. The Spanish city is the first in the world to be awarded a Biosphere certification and is committed to sustainability, ranging from environmental to social issues to mobility and sustainable accommodation.

Besides providing guidance to meeting planners on all aspects of Barcelona, the BCB also helps facilitate finding the right CSR project that meets the needs and values of event planners and their clients, Peretti explained.

“As per the market trends, CSR has been becoming an important factor when planning programs for many North American meeting planners,” Peretti said. “In order to meet the needs of meeting planners and to make a difference within their local community, it is important for BCB to create and promote CSR programs.”

She continued, “Moreover, BCB feels that it is part of a social responsibility to raise awareness and do their part. It is important for the health of the planet and it is important to stand for some global values. Going forward their goal is to continue and improve, offering CSR to support sustainability.”

Based on the enthusiastic feedback from BCB’s Volunteer Day participants, the bureau is looking into conducting a similar event prior to next year’s IMEX America, Peretti added.

Global Meetings Industry Day Kicks off Worldwide
The Meetings Mean Business Coalition (MMBC) and leaders from across the meetings industry are joining together today for the second annual Global Meetings Industry Day (#…
Anaheim Convention Center Kicks Off 7th Expansion Project
The Anaheim Convention Center kicked off their seventh betterment expansion with a ground breaking ceremony last week. Tom Morton, executive director, Convention, Sports and…
Los Angeles Convention Center Kicks Off the New Year Right with Fit Expo 2016
This year kicked off right with the LA Fit Expo, where nearly 60,000 expected attendees were on hand to share their love of fitness and health.   The conference and…
Entertainment Expo Hong Kong Kicks Off in Mid-March
The 12th edition of the Entertainment Expo, organised by Hong Kong Trade Development Council (HKTDC), will open on 14th March and continue through 4th April. The event will…
Cobo Cares Kicks Off Its 2018 Season with a Collective Namaste
As the sun rose over the Detroit River on the morning of May 23, employees, event attendees and members of the Detroit community helped jump-start Cobo Center’s 2018…
Largest Ever IMEX America Kicks Off in Las Vegas
Today is opening day for IMEX America 2018, the country’s worldwide exhibition for incentive travel, meetings and events. Held annually at the Sands Expo and Convention…