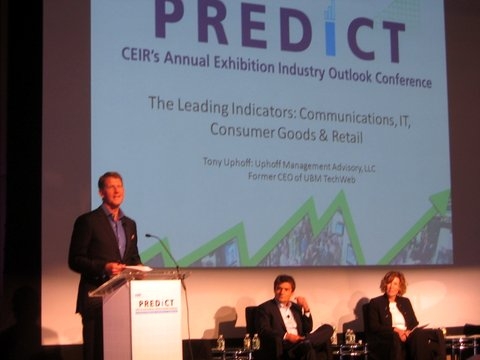 At the Center for Exhibition Industry Research’s Predict Conference, more than 130 C-level trade show industry leaders, M&A representatives, financiers, economists and sponsor suppliers gathered Sept. 13 in New York City and looked into a crystal ball to try and determine the future of the industry.

What they discovered was the overall sentiment in the room was one of cautious optimism.

While the U.S. economy still is slowly growing, the possible collapse of the Eurozone could have a profound effect on any recovery.

In addition, recent slowdowns in other emerging markets that previously had been growing in leaps and bounds, such as China, also could have an impact on the U.S. economy in the near future.

These findings and more were discussed in one of the first sessions of the day – “World Outlook: Dangerous Times” - led by John Walker, chairman of Oxford Economics, in  which he took a look at a more macro view of the global economy and what might be in store in the next few years.

“Last year, when I spoke (at Predict), I was cautiously optimistic,” Walker said at the beginning of his session. “The Euro has survived, there has been growth in the global community, but there still are struggles.”

Walker outlined some companies that have been performing exceptionally well, despite tough economic times, such as Apple and Boeing, but he also pointed out there were many more that have “been doing rather badly.”

“So far, it has been a pretty feeble recovery,” he added.

Walker named several forces that currently were shaping the global economic cycle, including develeraging in an effort to reduce debt, cash hoarding by corporations and high commodity prices, among others.

Even with the uncertainty clouding the Eurozone, though, Walker said the U.S. actually had a positive outlook, compared with other countries around the world, predicting slow growth stateside during the rest of 2012 through 2013 and 2014.

Doug Emslie, managing director of Tarsus, and Chris Brown, executive vice president of convention and operations for the National Association of Broadcasters, co-chaired the CEIR Predict conference and led everyone through a series of sessions that started with the overall macro-economic view and then moved into the health of the trade show industry specifically, with Doug Ducate, who heads up CEIR, giving a presentation on the CEIR Index and what is expected in the future.

As tracked by the CEIR Index, there have been eight straight quarters of positive growth in the trade show industry, according to Ducate.

He said in 2012, the first quarter saw 3-percent growth in the trade show industry year-over-year, and the second quarter came in with a 2-percent increase.

“The CEIR Index has been outperforming the GDP, but now it is more on par,” Ducate said.

He added that despite a slowdown in the total (CEIR Index), attendance increased by a strong 4.3 percent in the second quarter of 2012.

Other sessions throughout the day that were more industry specific included one about continued challenges faced by the building and construction sectors.

Hanley Wood President Frank Anton said housing starts dropped from a high of 2 million annually to just 500,000 annually in the midst of the recession.

He added that the drop deeply impacted the Hanley Wood Exhibitions portfolio that is heavily weighted in that market with a 35-percent dip in revenue and 48-percent dip in net profits.

Housing starts currently are on track to be 800,000. “Up is better than down, even if it is slow,” Anton said.

David Loechner, president of Nielsen Expositions, started his session that covered the government, medical, sporting goods and travel and amusement sector by saying, “Good afternoon, this is my third recessions.”

The panel of show organizers in those sectors focused mainly on how different health care reform laws and pressure on government entities to curb travel spending are having an impact on their events.

In another of the afternoon sessions for the communications, IT, consumer goods and retail sectors, Advanstar President and CEO Joe Loggia said one the biggest challenges facing the industry, especially looking around the room and seeing primarily middle-aged men, was to bring younger, more diversified people into the fold.

He also said it was important to consider that “just because our business was growing, we can’t assume our customer’s business was doing the same.” Loggia added that even if the shows in Advanstar’s portfolio were seeing gains in attendees and exhibitors right now, revenues still were down overall.

Another afternoon session was the “Outlook for M&A and Financing in the Exhibition Industry.”

The panelists included financiers who had invested in trade show companies and all of them agreed that the industry, which is predicted to be worth $11 billion by 2016, still was a very attractive one to be a part of.

The last session of the day that was led by dmg’s Galen Poss asked Nancy Walsh, executive vice president of Reed Exhibitions, and CEIR Predict co-chairs Emslie and Brown to discuss key takeaways from the day.

Highlights mentioned included Walsh saying that Reed had budgeted “pretty aggressively” for 2013, but after hearing about the continued uncertainty regarding the Eurozone she added they definitely need a “Plan B.”

Loechner said anyone that was not heavily engaged in social media was already behind.

Poss asked several people where they would invest their last dollar and most said the U.S., but Emslie said he would invest in the emerging markets.

Poss also asked the panel and audience how the industry would change in the next five years.

Emslie said the change would be an “evolution, not a revolution” and added globalization and growth in the emerging markets would continue.

Brown, who said he was focused on a 3-year view, said there was a lot of optimism in his industry, and “we will at some point crack the code on the 365 days a year approach” to creating the trade show experience.”

The event wasn’t just in-person; the last two sessions of the day were filmed by CNTV and streamed online to a global audience of more than 200 additional virtual attendees.

Those sessions can be viewed by clicking on the link in this CEIR blog.