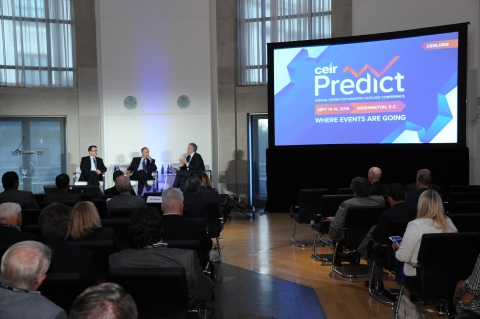 Washington, D.C - When the Center for Exhibition Industry Research’s CEIR Predict Conference was held last week in Washington, D.C., one thing was abundantly clear – as a company in the trade show industry, if you are not already taking steps to create robust intelligence utilizing the reams of data typically collected by every show, then you quickly are going to fall behind the eight ball.

The two-day event, held at the Ronald Reagan Building and International Trade Center, was attended not only by trade show organizers and suppliers, but also association leaders, economists and media.

Brian Casey, CEIR’s president and CEO, said, “This year we have record attendance (164), record registrations. We had to cut off registration.”

He added, “We hope people walked away with an urgency to look at how they might craft their events in the future.  Our intent has always been to deliver a future forward perspective, not one that looks back on where we have been.  I expect you will see more content coming from CEIR that follows this theme throughout the coming year.”

The room was filled to capacity for the kick-off session given by Dan Altman, economist, Gerson Lehrman Group, and adjunct assistant professor of Economics, New York University’s Stern School of Business, who took a deep dive into the current global economic outlook.

The good news primarily was focused on the United States, where not only has GDP grown at a steady rate since the recession, but also the exhibition industry, which is tracked on a quarterly basis through the CEIR Index.

Even so, Altman said he relies on “rational forecasting” meaning – “past performance is no guarantee on future results.”

Directly playing into this, when polled before the event, the CEIR Predict audience said the No. 1 thing they were most worried about impacting their businesses was global external factors.

The upcoming U.S. presidential election also is a cause for concern, Altman said, with issues possibly stemming from trade and immigration if Donald Trump is elected.

“I think a Trump presidency brings some uncertainty,” he added, “… a Clinton presidency, you kind of know what you are getting.”

Next up, Casey took the stage and affirmed that the U.S. trade show industry still was going strong, with 22 consecutive quarters of growth, although the last quarter tracked by the CEIE Index indicated growth had slowed year over year.

Food, building and transportation all are industries that are “doing well”, Casey said, but education and raw materials both were dragging the overall index down.

The final panel of the day featured Robert Costello, chief economist and senior vice president, American Trucking Association, and Chad Moutray, chief economist, National Association of Manufacturers, who talked about the future of their industries, both of which touch many facets of the trade show industry,

Moutray said that even though manufacturing has continued to grow, it’s been very slow – 0.4 percent. “It’s not growing as fast as we would like,” he added.

In trucking, Costello said for this year the “fundamentals are O.K.” Issues impacting the industry including the need for standard regulations across all 50 states, instead of states such as California having much more strict ones, and traffic congestion.

“There are billions lost sitting in traffic every year,” he added. “We are really behind the curve now.”

After breaking for a networking evening, CEIR Predict continued the next morning with Marc Pomerleau, vice president of Global Strategy for Freeman XP talking about "Leveraging the Power of Strategic Data Visualization.” When polled beforehand, 63 percent of the audience members said they had some kind of data strategy.

Pomerleau said that one way to engage people with data is create a visual story with it. Some important steps around data overall, he added, were “How do you post data, create predictions, then start making change?”

The point being, you can collect all the data you want to, and even make it look visually very appealing, but if there is no strategy around utilizing it to impact some kind of meaningful change, then it is a fruitless exercise.

One way to use data for the good of the attendees, Pomerleau said, was imagine if you offered a program that tracked airfares or hotel rates and sent people information on when was the most economical times to book their rooms and travel?

Some other data tools he mentioned that tracked attendee behavior included:

-          Germin8 – Social media Intelligence company focused on helping people understand and act in real-time on the conversations by their stakeholders.

The next panel up – “Presidential Politics, Pop Culture & The Press” - was filled with top journalists and moderated by MDG’s Vincent Polito, who was in charge of CEIR Predict programming, along with Kimberly Hardcastle-Geddes, also with MDG.

Jumping right in and talking about the presidential race, Brian Kelly, editor and chief content officer of U.S. News and World Report, said, “I kind of believe if this was 20 years ago, there would be no Donald Trump … he would be filtered out, but this is not 20 years ago.”

Daniel Lippman, associate editor for States and reporter for POLITICO, added that he thought a big test for Hillary Clinton would be “if she appears strong in all three debates. It will put to rest questions of her health.”

Robert Bierman, principal of Tiny World Media, said the media’s coverage of the presidential election had “an all-time low” as tracked by the Pew Institute.

When the question came up about how both of the candidates might impact business, Kevin Daum, media strategist, said he recently was at an event where all of the attendees represented companies with 100-200 million in revenues.

“They are not worries about the election,” he added.

From politics, back to data intelligence – “How Technology and Data Will Shift Industry and Live Events” – included David Saef, executive vice president of Strategy, MarketWorks and GES, and Andrew Trabulsi, research manager for the Institute for the Future.

Trabulsi talked about the vastness of data that can be collected online about one individual – over 5,000 data points – all of which can be used to create a ‘profile’. “You can draw predictions about behavior,” he added, which means you also could send targeted advertising based on the data – exactly what Facebook does with the ads popping up on people’s feeds.

Trabulsi detailed a few different data tools out on the marketplace right now, such as Crystal that tracks someone’s social media presence and for a small fee comes up with a personality profile on that individual, which includes what words to use when interviewing them or what typed of email might work best with them.

Another tool he pointed out was x.ai that schedules meetings for people by combing through each person’s calendar and finds open slots and then just sends an invite to the meeting.

One other tool Trabulsi talked about was AI Live that instantly transcribes anything you are saying into writing.

He added that it was important to consider “what would add most value to your attendees?”, as well as being transparent about the way data collected was going to be used.

The final panel of the day was filled with event technology companies including Feathr, DoubleDutch and Freeman and led by Marco Giberti, founder of Vesuvio Ventures, which invests in event tech companies.

“There has been $1.5 billion since 2011 raised for event technology,” Giberti started the panel off by saying.

Aleksander Levental, co-founder and CEO of Feathr, said companies like Google and Facebook are more than just technology, they are “data, marketing, advertising and relationship-making.”

The 2016 CEIR Predict wrapped up with the Association of Equipment Manufacturers’ senior vice president, Megan Tanel, leading an insightful discussion and pointing out key takeaways.