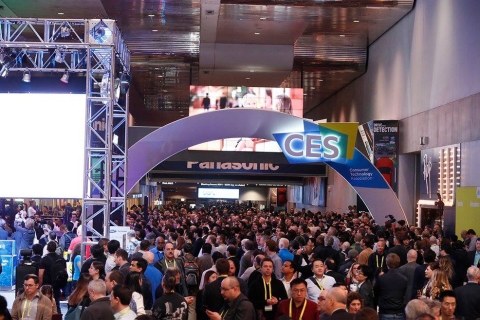 Trade Show News Network (TSNN) is pleased to announce the release of the 2016 TSNN Top 250 Trade Shows in the United States. Culled from show management and data supplied to TSNN, the list had a record number of submissions and represents the top 250 trade shows held last year in the U.S. ranked by net square footage.

The full, searchable list, sponsored exclusively by Expocad and the Orlando/Orange County Convention Center, can be found HERE.

The Consumer Technology Association’s CES 2016 show snagged the No. 1 spot again and spanned more than 2.47 million net square feet at the Las Vegas and Sands Expo Convention Centers, as well as several other venues around the city.

She added, “We are committed to providing our attendees and exhibitors the innovative, quality experience that the global consumer technology industry demands and has come to expect. We’re incredibly proud of this recognition from TSNN and will continue to improve the excellence and reach of our event year after year as the industry inevitably reinvents itself.”

“It is a tribute to the resilience of manufacturing in the United States that IMTS 2016 scored so highly in the TSNN Top 250 list.  Exciting new technologies that drive manufacturing forward are the foundation of IMTS and the 2016 show was no exception,” said Peter R. Eelman, AMT’s vice president – Exhibitions and Business Development.

“Las Vegas means business, and being named the No. 1 trade show destination for the 23rd consecutive year is an honor that recognizes our commitment to providing our clients with the most professional and productive experience possible,” said Rossi Ralenkotter, president/CEO of the Las Vegas Convention and Visitors Authority.

He added, “Over the next several years, we will be expanding and renovating the Las Vegas Convention Center to ensure that we are doing everything possible to maintain our status as the No. 1 trade show destination.”

Orlando scored the second most number of shows on the list, with 25, followed by Chicago, with 20, and New York City, with 19.

The rest of the top 10 city rankings included Atlanta, with 18 shows; New Orleans, with 9 shows; Anaheim and San Diego, with 8 shows; Indianapolis, Boston, Dallas, with 7; San Francisco, with 6; Houston, Louisville and Dallas, with 5; and closing out the top cities were Denver, Salt Lake City and San Antonio, with 4.

Emerald Expositions was the show management company with the most shows on the list, by far, with 30. Coming in second was UBM, with 12 shows, followed by Reed Exhibitions with 8 shows.

“Emerald’s biggest shows have decades long histories and strong brand recognition, and we are pleased to be recognized by TSNN for the strength and breadth of our portfolio,” said Emerald’s President and CEO David Loechner.

He added, “Big shows are important to our customers as they are the most efficient and effective way to network and exchange critical business information in very fractured environments.  Since 2011, we have nearly tripled the number of Emerald’s shows on the TSNN top 250 trade show list, and we plan to add even more shows to the list in the future through the organic growth of existing shows and through further acquisitions.”

Other companies with multiple shows on the list included Informa Exhibitions and Penton (division of Informa), with 14; J. Spargo, with 12; UBM, with 10; AmericasMart Atlanta, with 9; Reed Exhibitions, with 8; and PennWell, with 5.

The busiest month last year for shows was October, with 32 shows, followed by January, with 29. The slowest month was December, with just 5 shows.